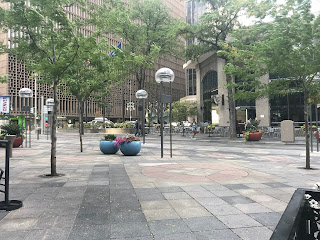 I'm in Denver for the #RWA18 National Conference. I think this sculpture of the dancing ladies is particularly appropriate.

This week's topic at the SFF Seven is Why do you abandon a project? What would make you (or let you) finish it?

I’m not much for abandoning projects. I don’t ever dramatically burn pages or delete documents. Now, some have gone into the equivalent of purgatory, languishing (possibly forever) in a file folder I may or may not be able to find. Some projects have been organ donors, giving up vital sections so another story may live. Those get laid to rest with reverence and celebration.

But why do I abandon projects? Usually it has to do with being able to sell them. That’s not the be-all and end-all, as I’ve certainly self-published some projects that were difficult to sell. But if the people who support me aren’t enthusiastic about a project, there’s usually a good reason for it.

But I can totally see a day when I’ve finished some of my current series and one of these back-burner projects becomes relevant again.

Here’s three projects I abandoned and why – and what it would take for me to pick it up again:

1.     A narrative nonfiction book about my college sorority

My editor said I wasn’t ready to write it and to put it in a drawer for a year. That was 2005 or thereabouts, so 13 years ago. That one could still happen, if I get a yen to go back to nonfiction.

2.     A memoir about my grandparents and their scandalous marriage.

This is something I worked on for my Ucross Foundation Fellowship, a LONG time ago. I’m not entirely sure I know why I put it down. It felt massive at the time and it could be I didn’t have the chops to write it. Same as above.

That’s an overly simple way of describing a complex story that would be a lengthy series, if I can get it right. I’ve written the first book twice in one genre – and massively revised several times – and did 100 pages in another. The first time I wrote it, I definitely didn’t have the chops to pull it off. Maybe even the next few times. It will get picked up again, when I feel I can do it justice.

In today’s podcast, I mention the reading Darynda Jones and I did at the SFF Reading Series at Denver’s BookBar last night, and how we discussed the importance of finishing writing projects. It IS critically important for newbie writers to learn to finish a novel or story. But there’s also no shame in realizing you don’t yet have the skills to execute it. The trick, of course and always, is being able to tell the difference. Thus it’s always better to finish it. At least write it and tie it off. Then, if you have to set it aside and write something else to hone your craft, then do that.

Abandoned projects aren’t dead, just sleeping. They’ll wait for you to be ready.