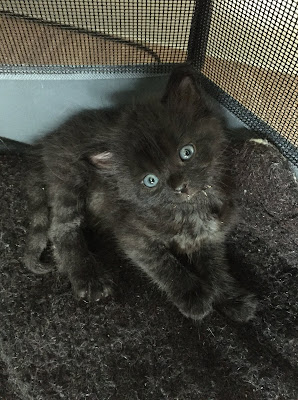 You've always wanted to write a book, you say. Crow will give you a few seconds of attention before he tips over asleep. It's a kitten thing.

Anyone who tells me they want to write a book is going to get encouraging noises from me. Always. I recognize there's a gap between wanting to do something and knowing how to do something. If it's the how-to someone lacks, I'll step up for that. Won't hold hands, necessarily, but pointers to writing groups and classes teaching writing - I'll absolutely lay that list on you.

And then I expect absolutely nothing is going to happen.

You know that 'I've always wanted to write a book' is code for the same thing as 'I should exercise', right? It's code for 'never going to happen.'

It's because in our heads, a sentence that starts 'I've always wanted . . .' or 'I should . . .' ends internally with 'but I won't.' It's a weird psychological thing but language matters and the 'always wanted' and 'should' statements are victim positions. When someone makes a 'should' statement, try immediately asking 'why don't you?' Watch the excuses flow. The person may even become irate and defensive. Until the language changes, the brain won't change, victimhood won't change, and that book sure as hell will never be written. (Nor will the exercise get done.)

The people who are eventually going to get a book written are the ones who confess in a shaking voice that they have this story knocking around inside their heads and they've set aside a half an hour every day to play around with it. They've taken ownership of their own longing and identified a small first step forward. Even if someone sidles up to ask what tiny first step they should take, I'm all enthusiastic because that's action-oriented, not an excuse to not take a tangible step in direction of a dream.

I don't mean this to sound harsh. Writing can be hard. You start with this grandiose mountain of an idea that you distill down to paper only to find out you've birthed a tiny, misshapen mouse. Some days the mouse is prettier than others, but almost never does it resemble the noble edifice towering in our imaginations. Writers have to learn to find joy somewhere in between the ideal in their heads and what ends up in the hands of readers. There are a lot of ego purges in writing. I suspect on some level the 99.5% of people who say they want to write a book but who are clearly never going to do so actually understand that they don't really want to *write* a book. They want to have written one. They want what they imagine follows from writing a book - notice, attention, adoration, money. Maybe a book tour that requires a passport.

But I know of almost no one who says 'I am SO looking forward to hours and hours of toil on something that may never see the light of day!'

That's why, if you're brave enough to decide  you no longer want to write a book, instead you ARE writing that book, feel free to ping me so I can cheer for you.