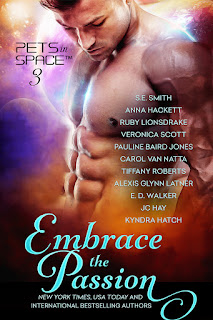 This is an exciting week for me because we’ve released our third annual Pets In Space anthology! My 41K word novel in the collection is a new Sectors scifi romance entitled Star Cruise: Mystery Dancer and I’ve taken a futuristic look at the ‘Anastasia’ urban legend. Is my princess the only survivor of a terrible massacre? Or is she an imposter? I also created a three eyed alien genie ‘cat’ as my scifi pet this year.

STAR CRUISE: MYSTERY DANCER blurb:  Tassia Megg is a woman on the run after the death of her elderly guardian. Her search to get off the planet in a hurry comes when chance directs her to an open dance audition for the luxury cruise liner Nebula Zephyr’s resident troupe. If there is one thing Tassia can do, it is dance!
Security Officer Liam Austin is suspicious of the newest performer to join the Comettes. She shows all the signs of being a woman on the run and seems to fit the Sectors-wide broadcast description of a missing thief, accused of stealing priceless artifacts. As he gets to know Tassia during the cruise, he starts to wonder if she’s something more – a long vanished princess in hiding from deadly political enemies of her family perhaps? And what’s the story with the three-eyed feline companion other crew members swear Tassia brought aboard the ship? Does the animal even exist?
As the ship approaches its next port of call, all the issues come to a boil and Liam must decide if he’ll step in to help Tassia or betray her. Life is about to get very interesting aboard the Nebula Zephyr as Liam tries to uncover the truth. Could F’rrh, the peculiar alien cat he has been hearing about, be the key to the mystery and Tassia’s fate?

The excerpt – Tassia explains part of her story for the first time:
Remembering his previous intuition that she was on the run and hiding secrets, he held her tight. “I need to know the whole story now, sweetheart, so I can protect you. Help you. Before we have to explain anything to Captain Fleming.”
Tassia took a deep breath, set the mug on the table with a thump, and sat straight. “I’ll have to tell the captain so I might as well start by telling you.” She gazed deep into his eyes. “I trust you.”

“Tell me what?” Nothing she could say was going to change his feelings for her but he sensed major trouble might lie ahead. No matter what challenges Tassia had, he’d stand with her and do his best to defend and protect her.
Raising her head as if she wore a crown, she said, “I’m the Imperial Princess Alynnskaya Tassiamilla Oleavna, sole survivor of the mass assassination that sparked the Ruatsar Rebellion.”

He stared at her, not sure he’d heard correctly, waiting for her to clarify the oddly timed joke, and then he realized she was deadly serious. She was the embodiment of the persistent urban legend, whispering through the stars, telling of the mysterious survival of one member of the doomed family.

“It’s a long story, but the RNR forces have been hunting for me almost my entire life.” Her voice was weary and her hands shook. “They’ve also been trying to regain the crown jewels, which the enemy believes I possess, but whatever bits of jewelry I had were sold long ago for food, a roof over our heads, or passage to the next solar system by the woman who was my rescuer and guardian angel.” She watched him. “I’m trying to reach asylum at the court of my great aunt, but it’s been a long and difficult journey through many Sectors.” 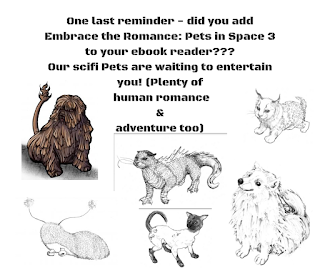