Two Spaces or One Plus NEWS!

(Squints at this week’s topic.) Really? One space or two after a period??? Well, ok, I started typing at the age of 7 or 8, banging away on an old Royal typewriter, never took a typing class (which is apparently where this two spaces thing was taught) so no, I don’t leave two spaces after a period. Or only by accident LOL.

(Dusts hands.) Done with THAT.

I had an exciting week – Pets In Space 3 made the USA Today Best Seller’s list, which is the second year in a row we’ve hit the list with this anthology. My fellow scifi romance authors and I are very grateful to our readers! We’re about to take the ebook off the wide distribution, as of October 25th, and go into Kindle Unlimited on November 1st, which is a new experiment for us regarding the collection. When the KU period ends after ninety days, the book goes off sale completely because we only have the rights to the stories for so long. So if you wanted to buy the ebook so you can read and re-read any time, here are the links! 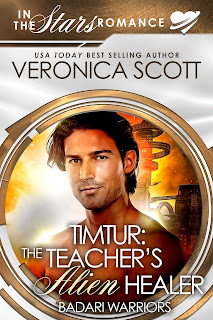 And then, I released the next book in my own scifi romance series, the Badari Warriors, Timtur: The Teacher’s Alien Healer, under the In the Stars Romance banner.

The blurb: Genetically engineered soldiers of the far future, the Badari were created by alien enemies to fight humans. But then the scientists kidnapped an entire human colony to use as subjects in twisted experiments…the Badari and the humans made common cause, rebelled and escaped the labs. Now they live side by side in a sanctuary valley protected by a powerful Artificial Intelligence, and wage unceasing war on the aliens. The luckiest Badari find their mates among the humans.

Far from her home in the human Sectors after the mass kidnapping, teacher Lily Garrison is making a niche for herself in the valley by running a school for the Badari young. Although she yearns for Timtur, the pack’s healer, another Badari male has his eye on her and won’t take no for an answer.

Timtur feels the weight and responsibility of being the pack’s only healer, constantly on call as the soldiers fight ferocious battles against the alien scientists and their troops. With scarcely a moment to himself, he’s drawn to the gentle Lily but worries he won’t be able to juggle his duties, his loyalty to the pack and a relationship with a human woman.

When Lily’s stalker takes direct action to kidnap her and steal her from the safety of the valley, she’s forced to reach deep inside to find the strength to battle for her life. Timtur realizes too late how foolish he’s been to resist the bond with his fated mate and leads the rescue effort.

Before this situation can be resolved both will have to put their lives on the line and decide what really matters in a dangerous world ruled by the enemy.

Although this is the fifth book released in the Badari Warriors scifi romance series, the story of Timtur and Lily is a standalone and actually comes immediately after book two’s events.

A tiny teaser excerpt:
He’s late. I hope he’s not planning to stand me up entirely.

Despite her concern and annoyance over her date Timtur’s failure to arrive on time, Lily sat on the flat rock jutting over the serene lake trying to remain calm. She raised her face to the sky, enjoying the warmth on her skin. Of course, all too soon she’d get a sun burn and be sorry for her rash behavior if she remained in the same spot. Red-headed, pale humans had that problem on every world, not just this one she’d been brought to by alien pirates as a kidnap victim.

Now she scanned the azure sky with less pleasure, fearing the sight of enemy flyers, even if this valley was labelled as a sanctuary by the Badari pack, including Timtur, who’d rescued the humans. Rising, she retreated to the shady forest glade surrounding the rock formation. The climb was an easy one, only a few feet, and she made it quickly. Heights were one of her phobias so she wouldn’t go much higher than this.

Except for the brief moment of savoring the sun’s warmth, on the whole, she felt safer hidden under the canopy of branches.

The picnic lunch remained in its container, probably still perfectly fine to eat, but not as delicious as it had been when she packed the foods in the valley’s communal kitchen a while ago. Winking and nudging her in the ribs playfully, the head cook made a joke about what big eaters the Badari warriors were. “Definitely, the way to his heart,” she’d said wisely.

Lily plunked down on the edge of the blue-and-green striped blanket she’d brought for this special date and knotted the fringe nervously. I can’t use the food to appeal to his heart if he doesn’t show up. This picnic had been his idea so surely Timtur wasn’t planning to avoid meeting her. She’d cancelled her afternoon classes to be free, gotten her hopes up maybe today was the day he’d want to talk about how he saw them as a couple…I probably placed too much emphasis on his wanting us to have time alone today, away from his packmates and my sisters. After all, dating is a totally new concept for the Badari.

She imagined him placing his strong, healer’s hands on her body, not just gliding above her skin exercising his special power. When she’d first arrived, she’d had a relapse of stasis syndrome that defeated the best efforts of the human doctor in the valley, and Timtur had spent hours attempting to heal her, monitoring her condition. In the course of the treatments, the two of them had talked endlessly about every topic under the sun and grown close. Of course, she’d fallen hard for her handsome healer. She wasn’t sure if he felt the same way.

Opening her eyes, she sighed. The healer was something special all right but, despite her best efforts to let him know how interested she was in taking their relationship further than friendship, he always held back. He didn’t show any interest in any of the other human women now living in the valley. She had no rivals for his affections. But still there was something keeping them from going to the next level, and today was the day she wanted to discover what the impediment was.

Which was going to be impossible if Timtur didn’t even bother to show up.

Should I give up on ever being more than friends? The idea of never seeing where their relationship could go, never exploring the deep emotional bond she felt with him brought a wave of cold sadness, and she shivered despite the warmth of the sun. Cutting herself off from contact with Timtur would break her heart, not cure her of desire for him.

“Dreaming again?” His voice, deep and full of good humor, came from behind and to the left. 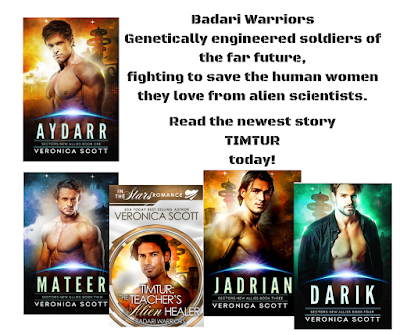