Confronting Failure - and Learning from It! 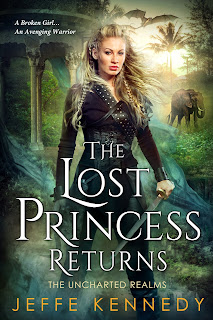 Did you see the cover for THE LOST PRINCESS RETURNS yet? I'm so in love with it for so many reasons, but mainly because it so perfectly captures Jenna/Ivariel in my mind. Especially everything she's feeling about returning to Dasnaria after all this time.

I'm glad everyone nagged me to write this story! The novella turned out to be a short novel, and releases June 29. You can preorder at the links below at a special sale price or here. Yes, there will be a print version; it should be available for preorder later this week.

Our actual topic at the SFF Seven this week is confronting failure. Not just the occasional downturns of fortune which is the lot of every writer, but also being able to take an honest look at what is just not working.

I recently signed up to be mentored during SFWA's Nebula Conference. (Salient note: because the conference was online this year, we've been able to keep it going. For a reduced price, you can avail yourself of the recorded panels and workshops, along with ongoing chats and discussions!) I've always volunteered to mentor others, and I've always joked that I *want* a mentor. While I know I have an enviable level of success compared to many, I'm also invested in evaluating what's NOT working in my career (Spoiler: I am not a millionaire) and how I can do better. I ended up having a fantastic conversation with Laura Anne Gilman. She took my questions and ramblings very seriously and gave me some great ideas for how I could "level up," career-wise. (She did say she thought "leveling up" applied mainly to craft, and I could see her point.) Amusingly enough, by the end of the conversation, she said she needed to write down some of her wise insights for herself.

I think taking a hard look at what is not working for us career-wise is just as important as taking those hard looks at why a manuscript won't sell or isn't grabbing people.

That kind of work never ends!

Or Buy the ebook Direct from Jeffe

More than two decades have gone by since Imperial Princess Jenna, broken in heart and body, fled her brutal marriage—and the land of her birth. She’s since become Ivariel: warrior, priestess of Danu, trainer of elephants, wife and mother. Wiser, stronger, happier, Ivariel has been content to live in her new country, to rest her battered self, and to recover from the trauma of what happened to her when she was barely more than a girl.

But magic has returned to the world—abruptly and with frightening force—and Ivariel takes that profound change as a sign that it’s time to keep a promise she made to the sisters she left behind. Ivariel must leave the safety she’s found and return to face the horrors she fled.

As Ivariel emerges from hiding, she discovers that her vicious brother is now Emperor of Dasnaria, and her much-hated mother, the Dowager Empress Hulda, is aiding him in his reign of terror. Worse, it seems that Hulda’s resurrection of the tainted god Deyrr came about as a direct result of Jenna’s flight long ago.

It’s up to Ivariel—and the girl she stopped being long ago—to defeat the people who cruelly betrayed her, and to finally liberate her sisters. Determined to cleanse her homeland of the evil that nearly destroyed her, Ivariel at last returns to face the past.

But this time, she’ll do it on her own terms.