Today, please join us in congratulating SFF Seven member Marcella Burnard, who is releasing Enemy Storm, the third book in her Chronicles of the Empire Series that began with Enemy Within. 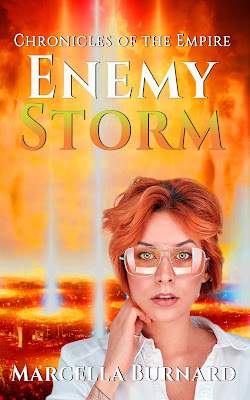 It's never a good day when a radioactive hunk of starship nearly drops on your head.

The Claugh Empire attacked Edie's planet fifteen years ago, murdered her parents, and left the teen for dead. So when a wrecked Claugh starship interrupts a salvage mission, she's torn between revenge and rescuing survivors—especially the stirring captain with an uncanny ability to rekindle her dead emotions. Something about him inflames the urge to come to terms with her past. But the mercenary in Edie doubts trusting a former enemy will bring her redemption or put old prejudices to bed. When a new common enemy, hell-bent on wiping out humanoids, threatens to bury them all, the captain tries to convince her a mutual coalition might breach their political impasse—all for the greater good.


Note: This quote from the author really piqued my interest and made me want to read: Main character Edie "is also very loosely based on a dear family friend who challenged me to write a deaf character without having to ‘fix’ the character or have her inability to hear be made into something that would ultimately save everyone. I tried. I hope I did her proud."


And Some Recs Because They're Awesome and #BlackLivesMatter

Last week, SFF Seven took some time to listen and mourn and get angry. This week, we're amplifying Black voices in publishing, specifically in SFF-dom.


Book I just bought and have started reading and wow: The Good Luck Girls by Charlotte Nicole Davis. A Kirkus Review Best of the Year selection for 2019, The Good Luck Girls is a Westworld + Handmaid's Tale fantasy adventure about five girls who seek "freedom, justice, and revenge in a country that wants them to have none of those things."

Book that broke my heart and was, among other things, one of NPR's best books of 2019: The Deep by Rivers Solomon with Daveed Diggs, William Hutson, and Jonathon Snipes. "The water-breathing descendants of African slave women tossed overboard have built their own underwater society—and must reclaim the memories of their past to shape their future."

Book that I read years ago and still adore: Radio Silence by Alyssa Cole is a gritty, smart postapocalyptic story with a romance at its heart (which is my weakness, admittedly).