We're celebrating our Saturday blogger Veronica Scott's latest Sci-Fi Romance release in her The Sectors series. Unlike our COVID-19 pandemic, this trip to the far, far future promises a Happily Ever After! 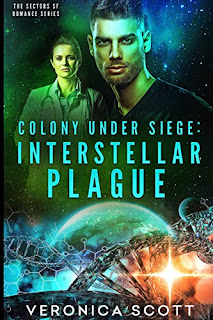 Newly graduated from a prestigious interstellar medical school, Dr. Saffia Mandell has been assigned to the Haven Two colony on the galaxy’s outer rim as the only doctor for some 2000 human residents. She’s counting the days until her five years there is up, trying to adjust to rural living after life in the crowded Inner Sectors and fighting her attraction to Chief Ranger Micah Navonn. She’s dreading the upcoming tourist season when the rich and pampered will descend on the planet for the scenic wonders and novel sports opportunities and no doubt inundate her little clinic but the colony depends on the seasonal income to survive.

>As the senior official for his people, the Calinurra, the indigenous inhabitants of Haven Two, Micah enforces the treaty, regulates the tourist permits, patrols the forests, and resists his fascination with Dr. Mandell. He never expected to be involved with a human woman and doesn’t want to believe in the concept of a fated mate. He wants to keep his life simple and isn’t ready for any long term commitment. Besides Saffia keeps proclaiming she’ll be leaving when her appointment is up in four and a half years so why should he risk his heart?

Then a ship arrives unexpectedly carrying a very ill little girl and soon the deadly virus is spreading through Haven Two. The colony authorities are desperate to cover up the problem to preserve the all-important tourist season and Saffia and Micah have to work together to battle the outbreak, the local administration, and their undeniable feelings for each other.

Can the colony survive? And will Micah and Saffia be able to move past their fears about entanglements to act on the mutual attraction?

Last week, dear Reader, we were radio silent on the blog because there were voices with powerful messages who needed to be heard loudly and clearly without us adding to the background din. Demanding diversity, pursuing equality for all, and dismantling white supremacy are goals toward which we strive. Pride Month and the BLM Movement are reminders for us to use our privilege to promote diverse authors and artists. To that end, here are three intriguing fantasy books I can't wait to read:

FRESHWATER by Akwaeke Emezi: An Igbo girl is a living prison for vengeful gods who grow more powerful with every trauma their vessel endures on the journey from troubled child to empowered young woman.

QUEEN OF THE CONQUERED by Kacen Callender: A fantasy murder mystery set in a colonized Caribbean with a Black noble using all the magic she possesses to stay alive and maybe even inherit a throne from a childless king.

DAUGHTERS OF NRI by Reni K Amayo: Twin child goddess separated when the old gods left the earth are raised as humans until each takes her own path to the villain king and the truths of family, power, and identity.