New Fantasy Romance: The Golden Gryphon and The Bear Prince by @JeffeKennedy 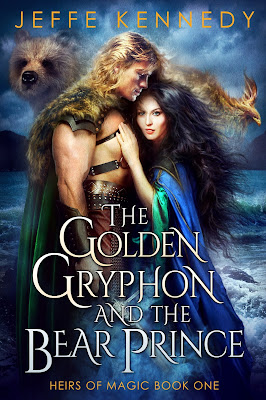 THE GOLDEN GRYPHON AND THE BEAR PRINCE
Heirs of Magic: Book 1


A Legacy of Honor

Crown Prince Astar has only ever wanted to do the right thing: be a credit to his late father’s legacy, live up to his duties as heir to the high throne of the Thirteen Kingdoms, and cleave to the principles of honor and integrity that give his life structure—and that contain the ferocious grizzly bear inside. Nowhere in those guiding principles is there room for the fierce-hearted, wildly free-spirited, and dizzyingly beautiful shapeshifter, Zephyr. Still, even though they’ve been friends most of their lives, Astar is able to keep Zephyr safely at arm’s length. He’s already received a list of potential princess brides who will make a suitable queen, and Zephyr is not on it.

Zeph has wanted the gorgeous, charming, and too-good-for-his-own-good Astar for as long as she can remember. Not that her longing for him—and his perfectly sculpted and muscular body—has stopped her from enjoying any number of lovers. Astar might be honorably (and foolishly) intent on remaining chaste until marriage, but Zeph is Tala and they have no such rules. Still, she loves Astar—as a friend—and she wants him to at least taste life before he chains himself to a wife he didn’t choose. There’s no harm in him having a bit of fun with her. But the man remains stubbornly elusive, staving off all of her advances with infuriatingly noble refusals.

A Quest to Save the World

But things change when a new terror threatens the Thirteen Kingdoms. Following prophecy, Astar and Zeph—along with a mismatched group of shapeshifter, warrior, and sorceress friends—go on a quest to stop a magic rift before it grows beyond anyone’s ability to stop. Thrust together with Zephyr, Astar finds himself increasingly unable to resist her seductive invitations. And in the face of life-and-death battles with lethal monsters, he begins to lose sight of why having her, just once, is such a terrible idea…