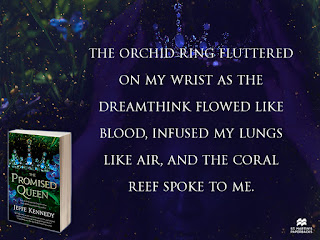 Our topic at the SFF 7 this week is: Dreamzoning (term from Robert Olen Butler’s book From Where You Dream): Do you daydream on purpose?
I'm not familiar with this book, but I absolutely daydream on purpose! I call it The Dreamthink.

The Dreamthink is so central to my creativity and productivity that I gave it to the heroine of my Forgotten Empires trilogy. For her it's an actual form of magic, and you can see it referenced there in the whim for the upcoming THE PROMISED QUEEN.

In my Forgotten Empires trilogy, the heroine—Queen Euthalia of Calanthe—uses the dreamthink to maintain her world. Because she’s magically sensitive, messages come to her in nightmares, when her mind is vulnerable. The world is a chaotic, broken, and wounded place—and it cries to her for help. When she wakes from these terrible dreams, she pretends to be asleep still, just to calm herself so she can face a day of politics.

In some ways, she isn’t entirely faking it. She wakes, then goes into another stage of sleep: the dreamthink.

Lia, who lives in a world that celebrates science and knowledge, but is not technologically advanced, has given this state its own name. It feels to her like a kind of light dreaming, where she can also guide where her mind goes. Those of you familiar with meditation or sleep stages, might recognize this as a trance state. Or it could be a Stage 1 sleep with theta waves (which are also present during meditation) or Stage 2 with sleep spindles in the brain activity. Magical or not, those are states of mind we all experience at some time or another.

I know I do! I made up the term “dreamthink” for myself. (Even though I do understand meditative trances and sleep states – lol.) Once I became a full-time writer, I gave myself the gift of waking according to my own natural rhythms. I don’t set an alarm, so I emerge from sleep gradually. Often I’ll lie in bed in that light sleep state a while longer, and mull over the story I’m writing. That’s why I call it the dreamthink—because I can guide my mind to that particular story thread, and then dream about what might happen. It’s a lovely, low-key way to puzzle over plot issues, and wonderful ideas present themselves to me.

In the first book of the Forgotten Empires, THE ORCHID THRONE, Lia uses the dreamthink to wrestle the nightmares. As the story progresses into the second book, THE FIERY CROWN, and as Lia begins to use her native magic in a more deliberate way, she summons the dreamthink to quiet her conscious mind and unruly emotions. The trance state of the dreamthink allows her to access the magic of the land, to expand her mind into other realms of reality.

If only we all had magic to heal the world in these troubled times! But we all can find a sort of dreamthink for ourselves. I think you’ll find it’s a great salve to worries of all kinds.

For those hoping to access the creative subconscious, this deliberate daydreaming brings its own kind of magic. Productivity comes in many forms - and sometimes that's when you appear to be worlds away, magicking up your own.