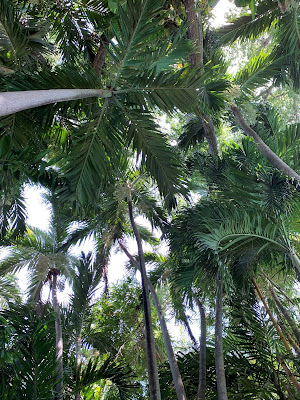 Greetings from the Hemingway House garden in Key West, FL. No mice here. Too many polydactyl cats on the property. They have the run of the place. They are pampered and well cared for and they own the place.

Like everyone else this week, the MICE tool is new to me. The concepts aren't, but I had never heard of them brought together this way. Still, who doesn't like a good acronym?

I love a good milieu. See photo at left. So. Milieu, Idea/Inquiry, Character, and Event. Those are my options.

Okay. Pre-existing conditions: we know Marcella is a character-driven writer versus being a plot-driven writer. This means that no matter what other MICE element I might use to frame a story, character is always, always a part of the picture in that frame. 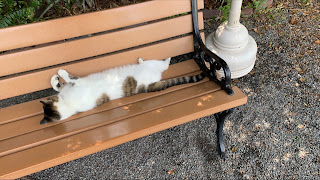 My first book opens with Ari being someplace she doesn't to be in a context she doesn't want and an EVENT kicks off her story.

Book three mirrors the first book. Edie is someplace she doesn't much want to be in circumstances she doesn't want. Then someone drops a burning spaceship on her head and things get worse. So again. EVENT.

Book four - - someone help. I seem to be stuck in a rut. The heroine is a prisoner sentenced to die in a war on a miserable planet in the middle of nowhere. And EVENT. Huh.

The Urban Fantasies start with character and a bit of milieu ,but then, that's the genre, isn't it? This makes me wonder if your MICE choices might be partially dictated by genre expectations. Idea/inquiry is going to show up reliably in mystery and thriller. UF really wants to linger in setting. Space opera requires a steep on ramp to an inciting incident - the event. Women's fiction usually lasers in on character. I feel like I rarely see a single element used from the MICE toolkit. It's usually a combination of two. I'm trying to think if I've ever seen a story that used more than that, though. I'm coming up empty. Can you think of someone who's used more than two tools at a time? Bonus points if they do it really well.