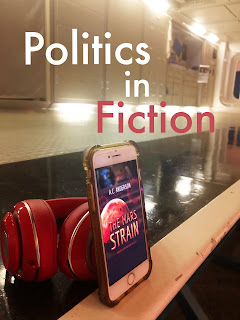 Politics. It’s all about who has what, who doesn’t have what, and who wants what. And that’s why I’d argue that politics play an important role in nearly every book, because politics are all about the conflict over power.

Not sure how to do that? Let’s check out some examples.

I write science fiction and fantasy, two genres rife with politics, and so I give you:

Game of Thrones—gobs of conflict over the iron throne

The Last Astronaut—a horrific fight between us and aliens

Hopefully you’re familiar with some of these. And if you’re not, I highly suggest picking them up because these are all fantastic reads! But it really doesn’t matter if you’re unfamiliar with the plots because they’re all the same: the players without the power do three things.

But what if your inciting incident doesn’t involve a takeover/overthrow/uprising? Then I say you’re missing out on leveling up by adding in some politics. Let’s go a little deeper. My audiobook, The Mars Strain, follows this politics breakdown more than one way.

The main plot line is a Martian organism that arrives and threatens life on Earth. My heroine and her team study and figure out how they are going to counter it, they pull in assistance from the Mars Colony and the CDC, and when they’re ready they put everything they’ve got into making their plan happen.

Excellent, right? That’s enough to carry a novel. But come on, we want a great story instead of a good one. So I added another layer.

The other thread is another entity—no I can’t say who because spoiler—who has watched the Mars Space Program from inception, utilized intrigue to recruit spies, and is now forcing the coalition to remove the program out of the US. This is big because the world is looking at the Mars Colony as the only escape pod!

What do you think? Are the politics in your story transforming the landscape of your book?