Cover Reveal! The Dragon's Daughter and the Winter Mage 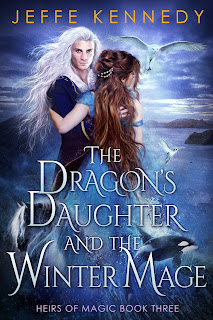 I'm headed out of town so today I'm just sharing a cover reveal for my September release! The Dragon's Daughter and the Winter Mage comes out September 24 and isn't this cover stunning??
Preorder here!

Invisible Loner
Gendra—partblood daughter of an elite mossback soldier and the only shapeshifter to achieve the coveted dragon form—is anything but interesting. She’s actually plain and awkward and … invisible. Every guy she meets either looks right through her or—worse—thinks of her as just a friend. Fortunately Gen is far too practical to wallow in self pity. Much.
A Search for True Love
But as Gen accompanies her oldest friends on a quest for Her Majesty High Queen Ursula, she can’t help feeling bitter about her lonely fate as, two by two, they pair off with each other. As usual, everyone but odd-woman-out Gen seems to be finding the happiness in true love that has always eluded her. And Gen’s pathetic attempts to come out of her shell have only met with social disaster.
Dragon’s Daughter
Still, with magic rifts plaguing the Thirteen Kingdoms and a strange intelligence stalking them from an alter-realm, Gen has plenty to deal with—especially when she’s cut off from the group, isolated and facing a lethal danger. It just figures that Gen is on her own, once again. But with no one coming to save her, she has only herself to rely upon.
And, perhaps, the help of a mysterious, stranded magician…