Weather: From Window Dressing to Antagonist 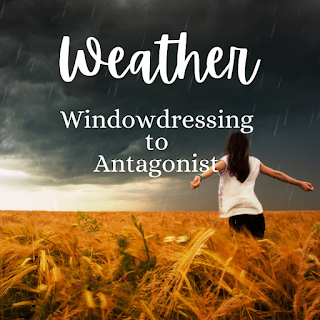 Question of the week: How often does weather/climate factor into my stories?

Sometimes the presence of weather/climate is negligible. Others, it's an external conflict for one arc of the story. Occasionally, it's significant enough to be the primary antagonist for the whole book.

Climate was less of an issue in my Immortal Spy UF series. It functioned primarily as window dressing to show the seasonal passage of time or establishing "this is not earth" settings. Once in a while, climate changes served to show-vs-tell the upper levels of magic in action. It rarely took center stage because my protagonist would be slightly inconvenienced by such changes, but not threatened. She's the kind of not-a-human who has to remember to wear a coat in the blizzard simply to blend in, not because she's cold.

However, in my Fire Born HF series, the grueling hot, arid climates in the first book were boons for my fire-warrior protagonist. OTOH, the persistent winter in the second book was a huge problem for her since ingesting moisture of any kind is toxic and relentless cold is crippling. Her circulatory system isn't blood-based, it's fire-based. Fire + water = bad. Safe to say the climate in Book 2 was an inescapable antagonist.

My current HF WiP takes place in a world of elementals, so climate is more than pivotal, it's personal, political, and very present.

Climate/weather is such a wonderful tool for writers. It can be a passive presence that sets the mood or a violent death-insisting character. It can dominate as a theme or subtly evoke emotions in the reader.