So this week the subject is whether or notg we incude charcters with physical limitations in our stories.

Of course I do. Where wouod the fun be if every character was nearly perfect?

But the less glib answe goes something like this: The characters, as in real life, are deg=fined not only by what they can do, but by what they can't do. Gooing all the way back to UNDER THE OVERTREE, my very first novel, I have always believed charcters should have flaws. Any in thius case, I mean physical flaws. Mark Howell, the main player in the story (I can really call hi the hero of the tale) was obese and obsessed wigth not being o erweight. He was obsessed witgh a lot of things, really, but he couldnpt stand being overweight because he thought that held him back from the girl of his dreams.

Tyler Wilson a scrawny kid with horriboe eyesight and a dangerousoy loud mouth, saw tghe world differently and refused to let the fact that he was blind as a bat without his glasses and didnt have a battgleship body to back uo his battleship mouth stop him from firing said mouth off at the drop of a hat. they had two very different approaches to their world, as well they should.

The thing ofit is, we as people are defined not only by the world around us but by our perceptions if that world. I think you have to show that as much as possible in writing if you want to breathe life into your golems.

I ALWAYA want my golems to live as much as possible. how can i convince reader to care about the characters if they aren't able to understand their motivations I may as well as comic readers to accept stick figures (all I'm capabe of drawing these days). Theose flaws, those physical limitations can make all of the difference. In SEVEN FORGES Andover Lashk is maimed for life, His hands are utterly destroyed, and he faces a life as a cripple, assuming he survives the infection that set in on his damaged limbs. The challenges and miraculous cure he is offered shape the rest of his life from that moment on.

In the SEVEN FORGES series, it is important that one faction of the people see scars as a weakness and another sees scars as a sign or strength.

Tead=ser time: Here's the back cover for a new anthology I'm editing. I'll posty more about that soon. 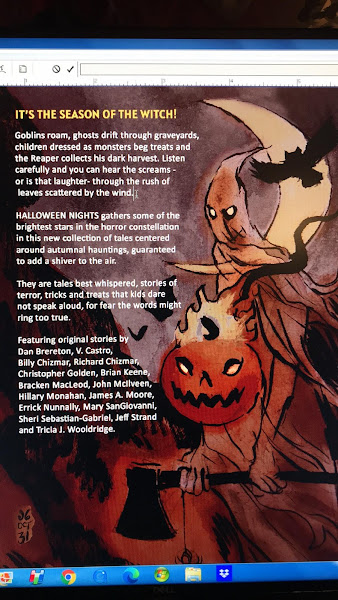