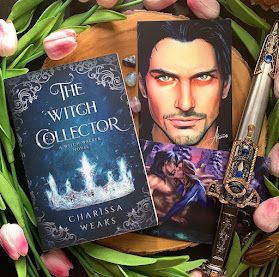 Hey all! This week's topic at the SFF Seven is The Importance of the First Line: Do We Buy It or Not?

Back in 2009, when I decided to start writing again, I wanted to learn everything I could about the craft. I can't begin to list all the writerly advice I absorbed that I've since realized doesn't work for every writer or every book. That said, one bit of advice seems to apply to most everyone in the publishing game: A catchy first line can hook your reader. But does it have to?

A hooky first line can act as a sales tool. If someone picks up your book or opens the sample online, that first line can make them curious enough to want to keep reading, thus hopefully purchasing your novel. A strong first line can deliver voice, theme, POV, and cause the formation of the first story question in the reader's mind.

Here's the first line from my novel, The Witch Collector:

It’s been eight long years since the Witch Collector took my sister.

Hopefully, that line entices the reader to want to know more about the above situation, who the Witch Collector is, why he took the POV character's sister, and why the POV character is stating this at the opening of the story.

Here are some of my favorite first lines. Note how each one creates a question for the reader--a desire to know more:

From The Golem and the Jinni:

The Golem's life began in the hold of a steamship.

From A Discovery of Witches:

The leather-bound volume was nothing remarkable.

When I was born, the name for what I was did not exist.

But here's the thing about writing advice: it isn't always true. Great novels don't always have great first lines, and yet can still go on to be blockbusters.

I was absolutely enthralled by the novel Dark Matter by Blake Crouch. It's fantastic. But the first line? I love Thursday nights.

Granted, the author relies on the question tool--Why does the character love Thursday nights? Yet that line in no way encapsulates the sci-fi/mind-bending novel that this book is. It does, however, create a question for the reader. Apparently enough of one to keep millions turning pages.

So do I buy into the advice of crafting a great first line? Most of the time. Is it wise for newer writers to craft strong first lines? I believe so. As a newly-published author, I try very hard to intrigue the reader with those first words because I can't risk the opposite. I don't have years of books under my belt or a massive fanbase that would overlook a weak first line. (Not that I'd do it anyway...it's not my style.)

I'll leave you with the first line from my upcoming novel, City of Ruin, book two in the Witch Walker series:

Thamaos’s ancient temple is deathly quiet, save for the crackling flames of a hundred candles and the sizzle of my blood burning in the offering bowl.

What do you think? Would you read further?