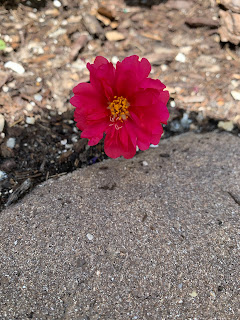 I recall one of those books we had to read in high school. In it, one of the characters is writing a book. Or he would be. If he didn't get up every single day and erase the first line of the book he'd written the day before and then spend the entire present day crafting an entirely new opening line (that will only be deleted tomorrow).

Yet the opening line of the novel wherein this desperate writer is a character was deceptively bland. It goes: The unusual events described in this chronicle occurred in 194- at Oran.

Not the shooting star of a first line that you might expect to lead you to lose yourself in the subsequent prose. Yet almost every single one of us assigned to read the novel did get sucked into the story and the brilliant writing.

So what makes a great first line? One exuberant flush of color and delight (like the moss rose bloom in my photo)? Or should they be more calculated? After all, first lines in fiction have so many jobs to do.

In genre fiction, we're taught early that our first lines must be compacted under pressure into shining diamonds that must do as many of the above within a reasonable (often fewer than twenty) words. It may be a wonder than any of us ever get past the first line of our novels. If we do, it's most likely because our first lines are rarely our first lines. Most of us allow ourselves, out of necessity, to write the worlds worst first lines, then we hone them only after the draft is complete. Anything else leads to madness. And incomplete drafts.

How do you write a great opening line? Don't. That is seriously my best advice. Leave it alone. Write the story. Let the opening line take care of itself until well after the story is complete. Only then, I'd argue, do you have complete insight into the characters, the story arc, and the emotion that will help you come up with a worthy opening line. I'll then suggest that you focus on crafting an opening line that sets reader expectations for the rest of the story. The reason being that a brilliant first line, while a lovely thing, sets the bar for the rest of the writing. Start with a bar that's too high and you leave yourself no where to go. Every single line that follows will need to be equally polished and brilliant. Great work if you can get it. I'm not saying throw away your first line. I am arguing that over polishing a first line or first page or first chapter creates something that no longer serves the rest of the story and creates an expectation that the rest of the story might not uphold. I'm more interested that the writing sounds like you than I am in how clever the first line might be.

"Sun glinting off the barrel of a gun stopped Captain Ari Idylle dead in her tracks."

That's the first line from my first published novel. Nothing special. But the 'uh oh' moment should tell you that you're about to go on an adventure with Ari. And it should maybe convey that while today isn't shaping up the way she'd expected, there aren't any dead bodies laying around. Because I didn't go with gore and horror to open Ari's story, you might catch the hint from this opening that there's tension to come, but the story isn't trying to be gritty or horrific.You might pick up that since this character is a captain that she's experienced and competent. You might assume that she's clever or at least observant.

When I wrote that first line, I wasn't aiming for any of the stuff above. I wanted to start the story on action. Nothing more. No normal world. No easing into conflict. I wanted my angle of attack to be a cliff face that Ari (and the reader) slammed into. I wanted those things because it was what I like in a story. I can't help but feel that if you write an opening sentence to your story that reflects what you like in a story, I'm going to know right away what kind of book you've written and that sentence is going to tell me far more than you ever intended.