What To Be And What Not To Be...That Is The Question 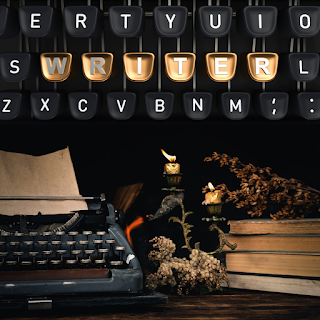 This week's topic at the SFF Seven is about vocational advice young writers receive because of the belief that writing doesn't put food on the table.

I battled with this more than I care to talk about. I wanted to be a writer from the time I was so small, and the desire only grew the first time I went to a book signing, in high school. Both of my parents were musical and creative. Not writers, though. They also came from absolute poverty, born just after the Great Depression, hitting their twenties in the 1950's and early 1960's. Living just south of Nashville with musical sensations springing up in rural communities certainly had its effect on my dad. He played at the Grand Ole Opry and made it on several radio shows. But the stars didn't align, and though he gave up on that particular dream, he still played music until he passed at 81 years of age.

For me, when I would mention wanting to write a book and see where it took me, the advice was always that success that's enough to live off of just isn't realistic. My parents believed in me, but more so in my ability to sing than write novels. Our entire family is musical, and I love singing, but I am not a performer and never have been. They loved music, though, so that's where they wanted to focus when it came to me. But in reality, my talents funneled toward one path, and that was writing.

Life happened, and by the time I faced college, I already felt the pressure to do something with the brains I inherited more so than my creativity. I was pre-med at first, but after clinicals, I quickly realized that I couldn't face dying people every day. Then I tried the teaching path--my mother was a teacher. But that didn't hold my interest in the least. I couldn't face five year olds everyday either ;)

So I tried nursing. Respiratory therapy. Psychology. I made it into different programs and went to college FOREVER and managed business and a physical therapy clinic, but nothing ever felt right. Yes, I loved the medical field, and I could easily be a perpetual student, but the bottom line was that I was trying so hard to please people who didn't believe in my creative ability because they stopped believing in their own.

In my thirties, I realized that you only live one life, and that it was time to start the journey toward the career I really wanted. It took a decade to get anywhere, though I wrote, edited, and learned constantly, stealing any time I could at my day job, at night, early in the morning, on weekends. I just didn't know how to balance the career I envisioned with my life: four teen and pre-teen daughters, a spouse who worked out of state and out of the country, and ailing parents who were ultimately my responsibility to care for.

But, now, here I am doing the thing I so wish I'd found a way to do twenty years ago. I wish my entire adult life could've been filled with writing stories. But I was the type of person who didn't believe in myself because others didn't. My husband and kids always believed in me, but self-doubt is a poison when it's programmed into you at a young age. It annihilates motivation and suffocates any thoughts of perseverance.

My youngest daughter is a creative. She sings, plays multiple instruments, can write EVERYTHING, from amazing magazine articles to screenplays to poetry to novels. She even draws and paints. She's in her last year of college for a degree in the recording industry with a minor in songwriting and plans to turn her most recent screenplay into a novel this summer.

The one thing I swore I would never do was tell her to try another vocational path rather than focusing on her creativity. Right now, that's easier, because she's still at home. But now is the time for her to try all the things. To see where her creativity can take her before life gets expensive, and she has no choice but to settle for a road she doesn't want to take. I want to give her every opportunity to build the foundation for a full, creative life that pays the bills. It isn't impossible. It just isn't easy.

I realize not everyone has that kind of support. I didn't have it. And the truth is, most writers struggle to keep a consistent income, so sometimes, that advice given to young people against the creative career path is meant to protect them from financial difficulty. But steering someone away from what they are best at doing on a day to day basis points them in the wrong direction.

Again...we get ONE life. And it goes by so very fast.

So here's my counter-advice to all the bad stuff that can cloud your mind: If you want to be a writer, not as a hobby, but to make it your full-time or even part-time career, try to believe in yourself. Realize that it will likely take time to get to the point where writing sustains you, and understand that it is constant work to maintain that income. Being a writer is like having homework forever.

But I believe in you, even if no one else does, and I hope you find a way to follow your heart, your dreams, but most of all, your ability.