Birth of a Book Cover

Recently, I got to preview the cover for my book coming in May 2017…it is GORGEOUS!!! But I can’t reveal it yet…so I’ll talk about another cover. (Tease, I know...)

In my experience, Editors generally ask an author what they anticipate the cover would look like. It is largely, I suspect, a courtesy. I also suspect that many authors site a certain scene from the story, and comment on the hero/ine’s ethnicity, hair color, age, etc. and any ‘props’ the character should have in the image.

I also suspect that a minority of authors have actually worked as graphic artists or in other directly creative positions.

Because I am one of those few, when my editor asked me specifically about ARCANE CIRCLE, I went to the internet and searched for people with awesome ink. ARCANE CIRCLE was largely about ‘unlocking’ the power bound in Johnny’s many tattoos, so I wanted to represent that on the cover. I found a photo of a woman whose back had a fabulous dragon and foo-dog image and I copied it to my computer. Then I searched for images of a woman with one arm raised. Scored another win in a picture of some young lady with her arm up, elbow bent, and forearm lazily draped across the top of her head. After saving it also, I opened up Photoshop.

I added a wand in the female’s hand, made the tip glowy and ‘magical.’ Then to I took the tattoo image, erased everything but the actual dragon and foo-dog, then adjusted the opacity until I could see through them just enough. This all took me less than an hour to search, find and complete my ‘mock up.’ It was rough, to say the least, but let me reiterate…it was a ”MOCK UP.” I proudly sent it off to the editor.

Her response was something along the lines of, “Do you seriously expect me to show this to the senior editor, coordinators, and/or sales staff?”

As this was the fourth book in the series and I was pretty confident that I’d have the same artist (Don Sipley) for this as I had for the previous ones, my reply was basically: “No, I expect you tell them whatever they need to hear…then send this image on the sly to the cover artist. He’ll know what to do.”

Indeed he did. WHATS MORE, the building in the background has the same overhang feature as a prominent building in the story, so the artist either got super lucky, or (more likely) he did a little research. (Respect!!!) And in turn, I modified one of the scenes to reflect Persephone's outfit as he portrayed it. This one of my favorite covers...the colors, the moonlight... What do you think? 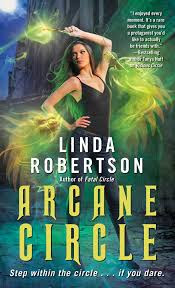