Is Networking a Meaningless Term? 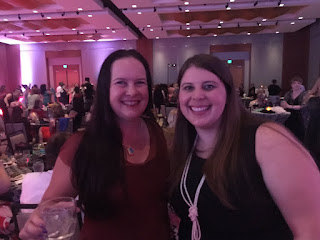 Every time I hear the term "networking" I get a particular image in my mind.

I see a guy - yes, always a guy - in a cheap suit, standing in a hotel bar and handing out cards. He manages this complex multi-handed tango of holding a half-full lowball glass with clinking ice cubes, shaking hands and palming those cards. "Call me," he says with a bleached-tooth smile. "Let's do lunch. Have your people call my people."

I have no idea where I got this image. Probably it's some conglomeration of scenes from movies and TV shows of the seventies. That cheap suit has a distinctly seventies flair, so that's quite possible.

At any rate, knowing this about me, it should come as no surprise to any of you that I never had a good feeling about "networking." I so did not want to be that guy in the cheap suit with the melting ice cubes and the car-salesman smile.

I'm no good at being anyone but who I am.

Thus, the short and surface answer to this week's topic, "The Net Worth of Networking," is that it's a big fat zero to me. No - less than that! Negative values there.

(and this is a big "however," fully justifying the all caps),

I was totally wrong in this image, wherever it came from.

I finally, through a number of experiences I could probably fill a book with, figured out that I had the concept of networking all backwards. Once I figured out what it's really about, I discovered that networking is a skill beyond price. It's brought value to my life - both professional and personal - that is so high I could never place anything as crass as a dollar value to it.

What is networking really about?

That's it. No business cards needed, no fake smiles and multi-armed handshakes. It's about connecting with other people who are interested in the same things that you are. It's being friendly with people in your profession - being generous with offering them help and being willing to ask for help when we need it.

Here's a little story for you.

When I was at a conference recently, I talked on the phone with a writer friend who hadn't been able to attend. We'll call her Writer Wanda. Wanda had heard from another writer friend that an agent at her agency was interested in representing Writer Wanda. Now, Wanda was uncertain about this step. She'd had some bad experiences with traditional publishing, wasn't sure she wanted an agent in general or this one in particular, etc. We talked pros and cons, then inspiration hit and I checked to see if the agent in question, Agent Annie, let's say, was at the conference. She was, so I offered to stalk Annie and find out what she's like.

Lemme tell you - it was super fun to stalk an agent for someone else!

Plus, I'd signed with an agent a few years before, and had pretty much retired those skills, so I also enjoyed polishing them up again.

So, I started by asking around. In the hotel bar. Hey - many fictions are rooted in reality. I'd looked up Agent Annie's Twitter bio - and followed her in case she posted that she was hanging out - but it's not always easy to find a real life person from a profile photo. It was lunchtime in the bar, so I wandered about, looking for a likely face. Along the way, I saw many friends I've made over the years. I stopped here and there to chat, asking if anyone knew this agent b+6y sight. None of my friends did, but one was eating with an industry gal who knew her. She described Agent Annie for me and verified she wasn't in sight.

I kept looking in this way throughout the day, but finally caught up with Agent Annie at the Harlequin party that night. (I asked the guardian intern dragons at the door if she was on the invite list and they told me yes, and that she'd already arrived.) At the party, I spotted her thanks to that description, and introduced myself. She said, "Oh, you followed me on Twitter today." I told her my mission, and she suggested we sit to eat cupcakes, have a glass of champagne, and chat.

When I reported back to Writer Wanda, she told me, "Networking is totally your superpower."

And I don't even own a cheap suit.