Networking. You already know it's good. You already know you need to be doing it. However. It is also true that money doesn't grow on trees. If, like me, you cannot get to conferences to do your networking in person (which is the ideal) all is not lost!

This is why Al Gore invented the internet.

Even though this is a great 'spot the dork' photo, even class reunions can be networking opportunities: 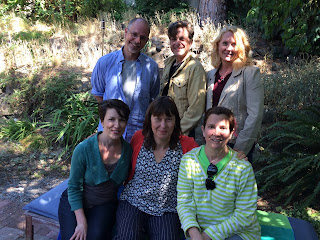 A few of my fellow Cornish grads. When I finally manage to produce an audiobook, I'll have several perfect choices for voice actors.

What does networking mean anyway? Cultivating relationships. Bet you thought I was going to run on longer than that. Nope. It's supposed to be a simple task, but it is as fraught as your first date was - all that fear of rejection! And of wondering what they'll think of you!

Here's a trick for handling networking (wish I could tell you it was fool proof, but networking queen I am not) - networking is NOT the place to talk about you. It's for finding out what everyone else does. Likes. Thinks. Believes. Values. You DO get to talk about you, but that blend should be at least 60 them/40 you. You network by having something to offer someone else. Whether that be time, talent, or knowledge. Offer. When someone asks questions on social media and you can answer, give it a shot. You may not get responses initially. Eventually you will. And when you need something, ask! This is part of your 40% - other people feel good when they get to help someone.

A true story as case in point: I'm in the middle of a draft. The research is destroying me because Civil War. Let me explain the level of available detail. O_o  Anyway, I needed to know whether scent hounds could track someone who was inside a vehicle. Many long, frustrating hours trying to figure that out and I stumble across a blog written by a woman who trains bloodhounds for police work. She had incredible content and detail. So I emailed her cold, asking my question. But in return for her reply, I made darned sure to offer what tiny little bit I had to offer: mention in the acknowledgements and a link to her site. A day later, I had the most amazing and generous encyclopedic answer. Short answer: Yep. Those dogs CAN track someone who's inside a car. Kat Albrecht is her name. The scent hound website. And her newest venture: producing live mystery events.

So networking need not mean jetting (or road tripping) to conferences. There are distinct advantages to conferences - there's nothing quite like getting to meet people face to face, but also? Bar. So long as James' excellent advice is followed. No being THAT guy or gal.

Help people. You'll be surprised who turns around to want to help you, too.