This week my blog-compatriots have nailed everything I could have hoped to say about the topic of networking. So rather than reiterate their valid points, allow me to squee about the re-release of mine… 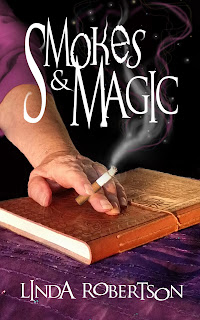 Many of you have messaged me to tell me that the short story prequel to my Persephone Alcmedi series Marlboros and Magic was unavailable on Amazon. I discovered that they had kept it from purchase because “Marlboro” is a trademarked name and it is against their policy to allow. (Though it had been allowed to sell for over a year…) So, I’ve finally got a modified cover, re-edited the text for a few minor rough spots, and re-uploaded it for Kindle. It’s the story of how Nana got evicted from Woodhaven Retirement Community. Here’s the link:
http://tinyurl.com/smokes-magic

And here’s a snippet:

Persephone Alcmedi leaned against the brick wall of the covered entry to Woodhaven Retirement Community. “You know why I’m here.”
“Yep.” Demeter Alcmedi, or rather ‘Nana,’ leaned against the opposite side tapping the toe of her untied tennis shoe—untied because her feet were swollen. She dug the cigarette case from the pocket of her white Capri pants, opened it and put a cigarette to her lips. As she flicked the lighter the stern expression on her wrinkled face dared her granddaughter to admonish her.
Seph crossed her arms and fixed Nana with a hard stare. Those little tubes of tobacco were the whole reason Seph was visiting on this late-September afternoon.
She looked Nana up and down. A silver bee-hive hairdo crowned her. As she mimicked Seph’s pose, her shoulders sank lower creating secondary rounded shape. Her hips swelled in a generous third curve, producing an undeniable snowman shape. The plus-size tunic with big red cabbage roses couldn’t hope to hide it.
Nana’s icy practicality and arctic wit combined with her resourcefulness made her a fierce polar bear of an old woman. Therefore, it stood to reason that the heat from the chain-smoked cigarettes was the only thing preventing her from freezing solid.
But the rules were the rules.
“Do you need me to buy you some of those smoking cessation patches?” Seph asked.
“No.”
“Nicotine gum?”
“No,” Nana repeated belligerently.
“Should I hire a hypnotist?”
Nana’s arms dropped to her sides in exasperation. “Now shit, Persephone.”
“What?”
“‘What’ yourself.”
“You could stop any time you want.” Seph made a decidedly magical hand gesture. “Cast a spell.”
With a defiant lift of her chin, Nana looked away.
Seph knew what button to push. “The addiction tougher than you are?”
Nana stamped her foot. “I. Want. To. Smoke.” She took another hit, blew the gray results into the air. “I like it. I like what it does. And since I’m paying mightily for the privilege of living in this dressed-up nursing home—”
“It’s not a nursing home!” They’d had this discussion a dozen times four months ago when Nana moved into Woodhaven.
Nana harumpfed. “Polish a turd, it’s still…a…turd.” She punctuated the last few words by pointing her cigarette for each. “I should be allowed to smoke whenever and wherever I want.”
“You knew the rules when you moved in here. You agreed. You signed a paper.”
Nana smirked. “That’s exactly what Mr. Loudcrier said to me yesterday.” She mimicked a puppet talking with her free hand. “Blah blah blah.”
Persephone recognized the name of Woodhaven’s CEO. She hadn’t been impressed by the self-aggrandizing ass, but he was in charge and it was his job to enforce the rules. “They have the right to evict you if you don’t stop, and trust me, he will. Then where are you going to go?”
Nana gaped at her.
Feeling like she’d won by implying that Nana wasn’t going to live with her, Seph pushed away from the wall. “You better think about that before you light up again.” She left Nana with that thought and walked to her car without looking back.