The Magic of A Good Book Cover 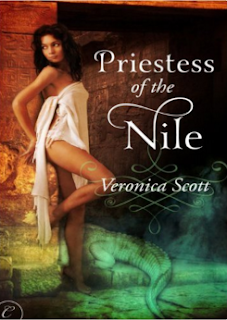 I was blessed by the cover goddesses on my first published book, Priestess of the Nile.  Carina Press asked the wonderful Frauke Spanuth of Croco Designs - who LOVES crocodiles - to create my cover and I still get compliments on the awesomeness.

It was so gorgeous and so evocative of the story and the time frame that I was nothing short of horrified when I got my second Carina cover, NOT by Frauke, and my Egyptian warrior was depicted as heavily bearded. Ancient Egyptian men were clean shaven, they're well known for that, other than the ritual beard worn by Pharaoh at times. Carina was very nice about fixing that aspect of the art (and I'm sure I was overreacting a bit, as a still pretty newly published author, but the Art Department was very patient.)

When I started self publishing, I went back to Frauke and have had her do all my subsequent covers for the ancient Egyptian series. I particularly love the art for Ghost of the Nile. 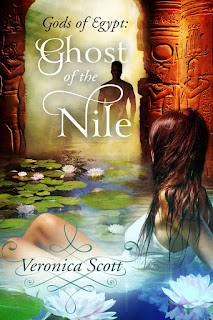 I self pubbed the science fiction romance novels from the beginning and have always worked with the amazing Fiona Jayde. Here's the first, Wreck of the Nebula Dream, which established the 'brand", as far as the font, and the stylistic elements of the hero and heroine, with a major scenic element from the plot under the title.

I was probably a pain to work with in the beginning. My daughter, also a published author, gave me a lot of helpful advice on which stock photos would and wouldn't work and what was pleasing and genre appropriate. I would gravitate to people and poses that now, looking back, I can see were totally wrong. I had a touching, if misplaced faith in the ability of the cover artist to manipulate stock photos. Um, no, stock photos are what they are. Someone as talented as Fiona can do some wizardy, amazing things but the basic photo has to be appropriate. 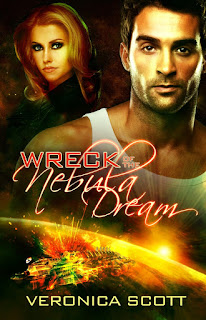 The way we work now is that I reach the point where I want my eye candy cover, usually when I'm partway through the first draft. I go spend a few hours searching all the possible categories on a stock photo site or two, and pull maybe eight guys I think might work, a woman or two who suggests my heroine to me, and two to  three scenic element examples. I go back and make myself be strict, removing the photos that won't work - pose not right, too smiley, not really the look of a Sectors Special Forces soldier - and then I send an e mail packed with stockphoto url's off to Fiona.

She gently sends back the few that are actually workable and genre appropriate, and I settle on one for the hero. Fiona tends to be much better than I am at picking the right woman for the final cover. I leave the scenic element up to her after I've sent my "these are kind of what I had in mind" samples. Sometimes she has to suggest alternative guys as well.

I can't share the rejected photos with you because we never actually buy them. We just look at them on the stockphoto site so I don't have the right to display them here. Sorry! 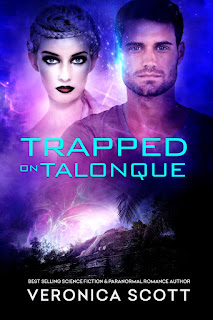 On my new book, Trapped on Talonque, I did find the heroine myself, lucking into a stock photo of a girl with the lavender-blue hair described in the book AND elaborately braided, which my heroine Bitha's hair is at one point. Wow! When you're doing stock photos you learn early on that you're probably going to see the same models and poses on a lot of covers and you're not going to be able to truly portray your characters exactly as they are in the book. You can only suggest the mood and emotion as you entice the prospective reader with your thumbnail.

Covers are critically important - you really need a high quality cover to stand out to the reader among all  the choices they have available these days. It should be clear what genre you're offering and not look like you made it yourself in one hour of photoshopping. Some authors do have amazing graphic skills and more power to them, but sadly, a number of the indie covers I see are lacking. I do a weekly roundup of new releases in scifi and fantasy romance for my personal blog and seeing all the covers in one place together, you really can tell who is a DIY person that probably should have hired a cover artist. (Tip: go look at the top 20 Amazon best sellers in whatever genre you're writing, and see how those covers look, in terms of stylistic elements, font, etc.)

Some day I'd love to be successful enough to have custom cover photo shoots, especially for the Egyptian novels, but until then I'm very grateful for Fiona and Frauke, and creative stockphoto sites.

Trapped on Talonque, the story:


Will an alien sleeping beauty awaken to save him, or destroy everyone around her?
When a Sectors Special Forces soldier and his team crash land on an alien planet, they’re taken captive and given a challenge–win at the violent ball game of sapiche and live. Lose, and they die, sending a mysterious, alien beauty to an even uglier fate. To survive, these soldiers must win the game and find a way to free the dangerous prisoner from her locked chamber.
Nate Reilly and his team are in deep trouble. Prisoners on a backward alien planet, they’re brought before an alien ‘goddess’, sleeping in her high tech seclusion. Nate is astonished when she awakes and establishes a psychic link with him. But her news is not good–he and his men must win a brutal challenge set by their captors, or they will die. She’ll give her aid, but in the end their courage and strength must win the contest.
Bithia sleeps in her chamber, as she has for thousands of years, since her own people unaccountably left her there. Viewed as a goddess by her captors, she must hide her ancient secrets to survive. But only the bravest of men may free her. Can she use her psychic powers to keep Nate and his men alive long enough to help her escape, or will her only hope of freedom die with them?
Amazon    Apple iBooks     Kobo    Barnes & Noble     All Romance eBooks