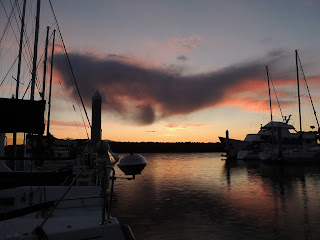 My Great Cautionary Tale: Summed up it goes like this - don't take your success (if you should be so fortunate) for granted.

We all know someone who wants to be a star, right? Maybe we all want that - if only for a little while. In the writing world, these are the people who's very first novel goes to auction. Sizeable checks follow. Accolades. Maybe awards. Praise. It's amazing stuff. And addictive as hell. After a time of hearing that you're brilliant (not the writing - you) it's easy to start absorbing that. Internalizing it. Investing your self worth in it. But success and such praise is as ephemeral as that cloud that looks like a whale in the photo above. (Yeah, yeah. Water vapor and sunlight. Humor me.)

What happens when the editor who went to bat for your amazing advance leaves? Or maybe, the books don't earn out that sizeable check? Or you break your wrist? Or . . .

Everything ends. Good and bad. If you define yourself by the stories that are told when you're riding high, how are you going to handle the inevitable disappointments that are a part of the business? How will you pick yourself up and start over when a critic pans one of your stories? Yes. I can name any number of people who've had their faces rubbed in this lesson - a couple crit partners deal with it. They had early success and their books did very well. They believed they'd done it. They had it made. And then imprints folded. A house went under. And a decade later, neither has published anything further. The joy of the writing process had been pressed right out of them. They still write, but there are a lot of excuses for NOT writing. So time slips away from them like it does from all of us.

Hell, I fall into that trap sometimes myself. On Monday, my father had a heart attack. (He's getting to okay, thanks. Also? Sleeping on hospital floors sucks.) Do you think I've written a word of my NaNo commitment? Well, I did. I'm way behind, but that's not the point. Even sitting listening to my father's telemetry, tracking the steady beep, beep, beep of his heart still beating, I wrote a few words. Writing is my refuge, NOT my definition of myself. It is a hard won lesson that I had to learn myself and from watching others. Enjoy what success comes, revel in it even, but make certain you appreciate it while you have it. Things change. And if you are unlucky enough to get knocked down for any reason, you won't have your vision of yourself shattered when you fall.