The Secret of My Success 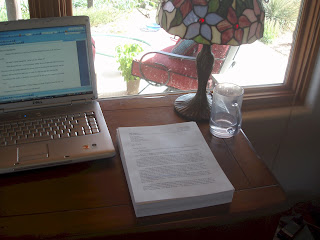 This week's SFF7 topic is The Secret to My Success – defining success and how to get there. For me, this post is going to be strikingly similar to last week's on writers I've known who gave up.

First, let me note that the photo above is six and a half years old. The enterprising zoomer will be able to see that the cover letter is dated May 13, 2010. The document on that (obsolete) laptop is a different book, one none of you will recognize.

I took this photo then to make a point - and for a blog post on Taking the Leap.

I was all hopefully sending off that novel, called OBSIDIAN, for consideration at DAW books. If you did zoom in, you'll see I name dropped Catherine Asaro, who was wonderfully generous in reading and encouraging me. All of you sharp-eyed readers will be no doubt saying, "Hey, Jeffe - you don't have a book with that title!" 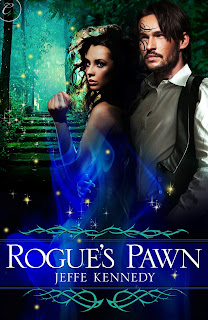 But I do have a book titled ROGUE'S PAWN. Published not by DAW, who actually never replied to me (at least, I can't find any record of it if they did), but by Carina Press in July of 2012. More than two years after this wrenchingly hopeful post.

I'm telling you folks - it's emotional for me to look back on that post. I don't know how it reads to you, but it clicks me right back to how I felt then. My first book, an essay collection called WYOMING TRUCKS, TRUE LOVE AND THE WEATHER CHANNEL, had come out in 2004. While I'd been publishing essays and stories in various magazines and anthologies since then, my writing career felt entirely stalled. I'd been traveling one to two weeks out of every month for the day job and had no good habits for producing work. When I sent this manuscript, we had been in Santa Fe, NM, for about nine months, after over twenty years in Wyoming. I'd even written a blog post right after we moved in called Now, Where Did I Pack My Writing Career?

I sound pretty blue in that post, don't I?

So, I took that photo above, partly in celebration that I'd managed to get something done. A big something. When I uploaded the photo - I remember this quite clearly - it linked me back to years before, when I first decided I wanted to be a writer instead of a scientist. Sometime around 1996.

We lived in this tiny house and my stepchildren were still kids, living with us part time. David helped me (really, I assisted him) convert the old coal bin into an office so I could have a quiet space to write. (We blew black snot out of noses for a week - nasty stuff.) And wow, that makes me a little teary, too, thinking of how enthusiastically he did that for me. We ripped out the "insulation," which was mainly newspapers dating back to 1913 when the house was built. We had a heating duct extended to the room and an electrician install outlets. We put in real fiberglass insulation, drywall and carpet. I have a lot of nostalgia for that little room and my desk there.

We were big into creative visualizations - picturing the success you want. But I didn't know how to picture success as an author. Should I imagine books on shelves, winning awards, being feted by fans? (I always think of that scene in Bedazzled, when Brendan Fraser as a writer arrives at the party.) All of those things felt tangential, and largely about ego. Besides, how did I know what my books would look like, to picture them. So, I settled on visualizing the manuscript, a big stack of paper filled with words, ready to send off.

And, hell, it only took fourteen years!

Thus, My Secret: Persistence. It takes as long as it takes. KEEP GOING.