The Right Words at the Right Time - Supporting Newbie Authors 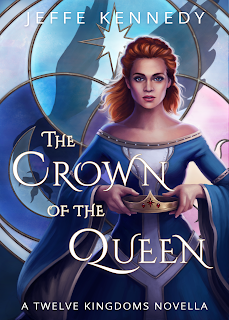 THE CROWN OF THE QUEEN will be available as a stand-alone novella on November 22! (You can preorder now at Amazon, Kobo and Smashwords.) If you already have FOR CROWN AND KINGDOM, this is the exact same novella in that duology with Grace Draven. You can get mine alone for $2.99 or both of us for $3.99. A deal, either way!! If you haven't read it, THE CROWN OF THE QUEEN takes place between THE TALON OF THE HAWK and THE PAGES OF THE MIND. It's told from Dafne's point of view and bridges the events in the aftermath of TALON and sets up her book, which is PAGES.

Our topic this week is "The person(s) most influential on my early writing career."

This is like picking literary influences - there are so many!

But it's been fun to contemplate, thinking about those very early days in my late twenties, when I finally realized I wanted to be a writer instead of a scientist. It was really difficult for me to tell people about that.

Because, well, it sounds silly, right?

In telling people I wanted to write books, I felt like every other person who's ever made noises about "someday writing that novel." And, to be frank, many of the people I talked to about this enormous pivot in my life plans pretty much nodded, smiled, and blew it off as so much wishful thinking. Those were the nice ones.

My PhD adviser - with whom I had a contentious relationship at that point as I struggled to complete my degree - said, "I think writers need a lot of self-discipline, to work steadily on projects over time - are you sure that's for you?"

Others were kinder, but "helpfully" presented statistics on the impossibility of such enterprises. One friend, however, one of my sorority sisters from college, sent me two books on writing. She probably went to a bookstore and asked for something to send a budding writer, because they're two of the classics. More important, she sent a note with them that said, "The only people who are annoying because they talk about writing a novel are the ones who never do it. I know you will."

That meant everything to me.

I could go from there, to those early classes and the various writers who took their time to teach me - because the list is long of teachers who did so much to help me along, which is part of why I teach, in turn - but it was the people who gave their whole-hearted supported who made that initial difference.

It's easy to crap on someone else's silly-seeming dreams. Of course they don't have the writer's discipline yet. That comes over time. Of course the odds are stacked against making a living as a writer. They're even higher for the person who never actually writes the book.

So, this goes out to Sandy Moss, who sent me those first books and - most important - the faith at exactly the right time.

Turns out, you were right! As always.

Much love to you, too, in TTKE.

Email ThisBlogThis!Share to TwitterShare to FacebookShare to Pinterest
Labels: dreams, encouragement, For Crown and Kingdom, Grace Draven, newbie authors, The Crown of the Queen, The Pages of the Mind, The Talon of the Hawk