Cover Reveal and Excerpt LADY OF THE NILE 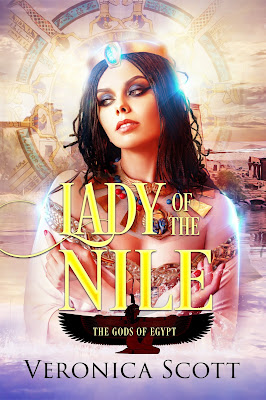 I was excited to do a cover reveal this week for my next paranormal romance, set in ancient Egypt. I hadn’t written one in quite a while and it was fun to dive back into my version of 1550 BCE! I also have a new scifi romance coming in November – more on that next week.

Tuya, a high ranking lady-in-waiting at Pharaoh’s court, lives a life of luxury, pageantry and boredom. Khian, a brave and honorable officer from the provinces temporarily re-assigned to Thebes, catches her eye at a gold of valor ceremony. As the pair are thrown together by circumstances, she finds herself unaccountably attracted to this man so unlike the haughty nobles she’s used to. But a life with Khian would mean leaving the court and giving up all that she’s worked so hard to attain. As she goes about her duties, Tuya struggles with her heart’s desires.

Can Khian find her in time? Will he and his uncanny allies be able to prevent her death? And if the couple escapes and reaches safety, what of their fledgling romance?

Facing down the attacking Hyksos hordes at the Meribe Pass had been easier in many ways than preparing to meet a grateful Pharaoh to receive the reward for not accepting defeat. Captain Khian walked the line of his small troop murmuring encouragement, straightening a sword here and making a joke there, anything to lighten the men’s tension as they waited outside the ceremonial chamber for their moments under Pharaoh’s eye. It wasn’t often that common soldiers had the chance to stand in front of the Living God who ruled Egypt. The idea was terrifying.

At last the scribe touched his elbow. “You can march in now, captain.”

He nodded, gave his soldiers one final, critical inspection. “We’ll do the Jackal Nome proud, men.”

Khian set the pace, walking behind the young scribe, keeping his proud military bearing, not looking to the right or the left but focusing on the glittering dais where Pharaoh’s golden throne sat and the Great One himself waited to honor them. He might be only a landholder, commissioned to fight in the war against the invaders, rather than one of the career officers, and his men might be farmers in their daily lives, but by the gods, they’d held that damned pass and saved the day for Egypt. Pride for what his troops had accomplished in battle filled his heart and pushed aside trepidation over being in a completely foreign environment now. He just wanted to get through the ceremony without disgracing himself or his men in front of the ruler.

The scribe had them line up off to the side, awaiting their moment with Pharaoh, who was still speaking with a group of ambassadors. “Your name will be called and then move forward in front of the throne. Salute and stand at attention.”

“We’ll do as you instruct.” Khian clenched his hand on the hilt of his sword. He gazed across the chamber while he waited, taking in the crowd of courtiers attending the audience. For the most part the nobles, officers and functionaries were a blur of painted faces, fine clothes and elaborate jewelry but one woman caught his attention. She sat near the queen, so was obviously high ranking, but her expression was sweet rather than haughty and she stared at him as if trying to give him encouragement. Could she tell he was nervous about committing an inadvertent error of royal protocol? The lady smiled, plying her ostrich feather fan flirtatiously. He made a slight bow to her, before he abruptly remembered where he was.

Ridiculous as it might seem, he felt as if he had a friend here.

Boredom had been weighing on Tuya all afternoon. She’d sat through many audiences at the court of Pharaoh Nat-re-Akhte and this one was no different—newly arrived dignitaries to greet, a few issues needing  Pharaoh’s judgment, gold of valor to be awarded to a deserving soldier or two. In her five years as chief lady-in-waiting to the Royal Wife, Tuya had seen all variations.

Pharaoh would present the gold of valor next, and Tuya found herself glancing at the assembled soldiers. The officer captured her attention instantly. Something about his face drew her gaze. He had the look of a man going into combat and she guessed his unfamiliarity with royal protocol and the customs at court might lie at the heart of his tension. Or he was worried for his men that they’d manage the moments under Pharaoh’s scrutiny with honor. Direct attention from the living god was a frightening thing to most people.  She wished she could take the officer aside for a moment and reassure him that Pharaoh was a kind man, a soldier himself in fact, and would most likely be tolerant of any minor breaches in protocol from overawed rural troops.

The captain was looking at the crowd now, as he waited, and when his attention turned to her, she smiled and tried to project encouraging thoughts for him. It doesn’t matter how the court perceives you, only Pharaoh’s opinion counts with the gods.

Email ThisBlogThis!Share to TwitterShare to FacebookShare to Pinterest
Labels: ancient Egypt, Cover Reveal, Gods of Egypt, Lady of the Nile