Release Day! The Imposters of Aventil by Marshall Ryan Maresca

It's Release Day for our own Marshall Ryan Maresca's latest in his world of Maradaine,  The Imposters of Aventil. Veranix is back in this blend of fantasy, mystery, and adventure.


"Veranix is Batman, if Batman were a teenager and magically talented.” —Library Journal 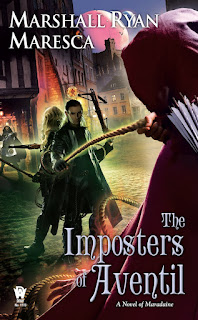 Summer and the Grand Tournament of High Colleges have come to the University of Maradaine. If the heat and the crowds weren't enough to bring the campus and the neighborhood of Aventil to a boiling point, rumors that The Thorn is on the warpath—killing the last of the Red Rabbits—is enough to tip all of Maradaine into the fire.

Except Veranix Calbert, magic student at the University, is The Thorn, and he's not the one viciously hunting the Red Rabbits. Veranix has his hands full with his share of responsibilities for the Tournament, and as The Thorn he’s been trying to find the source of the mind-destroying effitte being sold on campus. He’s as confused as anyone about the rumors.

When The Thorn imposter publicly attacks the local Aventil constables, the Constabulary bring in their own special investigators: Inspectors Minox Welling and Satrine Rainey from the Maradaine Grand Inspectors Unit. Can Veranix find out who the imposter is and stop him before Welling and Rainey arrest him for the imposter’s crimes?