How Do You Find the Measure of an Arc?

Considering I’m just now writing book #1 of what I plan to be a series with an overarching arc, I don’t have much to add to this discussion  - sorry.

I always have to be mindful of my Muse’s peculiarity that if I think about a story too much before writing it, then I won’t ever write it, because it feels ‘done’ to me. So in trying to figure out the long term arc of this scifi romance series, I had to be very careful or all the momentum would die ded. We’ll see how I do.

In other news, Embrace the Romance: Pets in Space 2 has had a great release week, sales/ranking/review-wise and I’m really happy readers seem to like my rock star romance in the anthology.

Here was one review (if you don’t mind me squeeing just a bit). Heather's well known in SFR circles so her opinion carries weight with me and she got what I was going for: 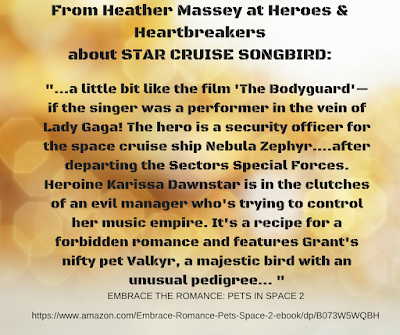 Blurb for Star Cruise: Songbird:
Grant Barton, a Security Officer on the Nebula Zephyr, is less than thrilled with his current assignment to guard an Interstellar singing sensation while she’s on board the ship. It doesn’t help that he and his military war bird Valkyr are dealing with their recent separation from the Sectors Special Forces and uncertainty over their future, with their own planet in ruins.

Karissa Dawnstar is on top of the charts and seemingly has it all – talent, fame, fortune and devoted fans, but behind her brave smile and upbeat lyrics she hides an aching heart. When a publicity stunt goes wrong, Karissa finds herself in the arms of the security officer assigned to protect her – and discovers a mutual attraction she can’t ignore.

Blurb for Embrace the Romance: Pets In Space 2:
The pets are back! Embrace the Romance: Pets in Space 2, featuring twelve of today’s leading Science Fiction Romance authors brings you a dozen original stories written just for you! Join in the fun, from the Dragon Lords of Valdier to a trip aboard award-winning author, Veronica Scott’s Nebula Zephyr to journeying back to Luda where Grim is King, for stories that will take you out of this world! Join New York Times, USA TODAY, and Award-winning authors S.E. Smith, M.K. Eidem, Susan Grant, Michelle Howard, Cara Bristol, Veronica Scott, Pauline Baird Jones, Laurie A. Green, Sabine Priestley, Jessica E. Subject, Carol Van Natta, and Alexis Glynn Latner as they share stories and help out Hero-Dogs.org, a charity that supports our veterans!

10% of the first month’s profits go to Hero-Dogs.org. Hero Dogs raises and trains service dogs and places them free of charge with US Veterans to improve quality of life and restore independence. 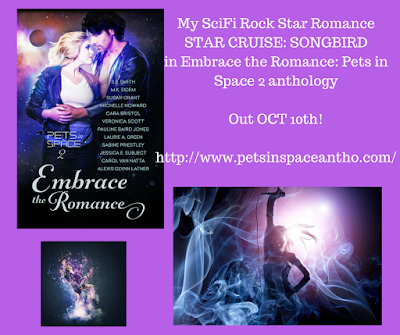 Email ThisBlogThis!Share to TwitterShare to FacebookShare to Pinterest
Labels: #petsinspace, Embrace the Romance: Pets In Space 2, Pets In Space