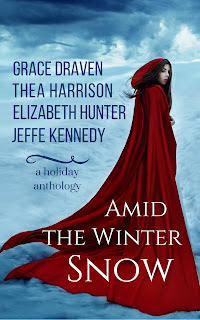 Our topic this week at the SFF Seven is: If you were going to be in an anthology with any three authors, living or dead, who would you pick and why?

Amusingly enough (and this was totally NOT my topic suggestion, even) I get to be in an anthology in December with three AMAZING authors. So, I feel I'd be remiss not to mention that. It's particularly shiny for me because Thea Harrison put the concept together, and I've been loving her Elder Races series for years. So much so that I stalked her, arranged to meet her for breakfast at the RWA conference in NYC a few years ago, and made her be my friend.

Then Thea also invited Grace Draven and Elizabeth Hunter to play, both of whom are wonderful writers who'd I'm thrilled to be alongside. It's a great concept on Thea's part, because we all have similar voices and fantasy styles, which should make for a fabulous collection.

The book is called AMID THE WINTER SNOW, and will be four novellas, each set in one of our worlds, taking place over the midwinter holiday. My story is THE SNOWS OF WINDROVEN, which (for those who are familiar with the Twelve Kingdoms/Uncharted Realms series) is a continuation of Ash and Ami's story, told from his point of view, during the Feast of Moranu at Castle Windroven. I have some hints of what Thea, Grace, and Elizabeth are doing and I'm so psyched to read those stories. If I weren't IN the anthology, I'd totally be jonesing to buy it.

So, really, this is my dream anthology, right there. Lucky Jeffe!!

Then, if I were to get all super dreamy about it... wow.

Kind of gives me the chills to put my name in there. Also makes me feel pretty uppity. I'm safe in this dream, because Anne and Tanith have died now, so it will never happen. Not that it would have happened anyway, but these are the writers whose fantasy stories shaped me and who I still emulate.

Or WISH I could emulate.

That said, I feel pretty effing fancee being in AMID THE WINTER SNOW with those writers, so my dreams don't exceed my reality by much. Counting my blessings.