Responding to the Fandom 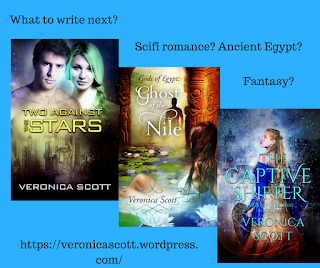 Or what events should happen to which secondary character, who should fall in love with whom, or any other aspect of my various series.

I’ve been writing for myself since I was age seven. I write the stories I want to read more of and can’t find, whether set in ancient Egypt or the far future of my Sectors.  I LOVE that I have readers who enjoy the stories too! I like hearing from readers and I don’t mind at all if someone tells me they’d love the sequel to Mitch’s adventures in Escape from Zulaire someday, or asks why am I “wasting my time writing fantasy when I should be spending my time writing more scifi romance”, as I was told by someone after my book The Captive Shifter came out. Well, as it happens, I wrote that story originally in late 2010, I like that story, I like the characters and I let it sit and stew until I felt I could revise it to the point where it was ready to be published and then there it was. Two sequels will be forthcoming, and maybe more, because I have other tales I want to tell in that world. I’m personally excited by that world!

I’ve even been told that at least one reader wants me to get on with the end game war between my deadly aliens, the Mawreg, and the human-ruled Sectors. Don’t hold your breath, anyone. I have a LOT of stories to tell in the Sectors and none of them is a giant space opera full of space battles to resolve that conflict. I’m drawn to the more individual stories, set on one ship or one planet. Filling in the edges of the puzzle, not doing the whole 1000 piece finished-architecture at once.

I do have a sequel in mind for Mitch of Zulaire now, by pure coincidence, but I don’t know when my Muse and I are going to get around to writing it. As everyone here knows (because I say it so often), I’m quite superstitious about how my Muse works and I only write what I’m really in the mood to tackle at any given time. If the words are flowing – yay! If a new and shinier idea pops up, I’ll go where the creative energy is. I don’t usually hop to a new plot about some other set of characters in the middle of writing a specific book, obviously, but as the next new project down the road.

It’s probably just as well I’m not traditionally published, with a contract that says I need to write the next book in series XYZ. Apparently my Muse and I rebel at such direction! We like to meander among the myriad of creative possibilities and pick whichever thing appeals to us.

I don’t want to sound truculent (always wanted to say that word!) but I don’t take direction either. Life is too short, I have too many stories to tell and the Muse knows which one needs telling next.