Do you remember as a kid finding a book in the library? It looked great, so you checked it out. Then you started reading. It's a hit out of the park. You LOVE this book. You're right in there with the characters, laughing, crying, fighting -- and then the book ends on a cliffhanger. Then and only then do you realize you have a book that's the first in a series.

Heart fluttering, you rush back to the library. There! On the shelf! More titles by the same author. You search frantically. You come up with books three and four and seven.

Right then. Right there. Your innocent little bookworm heart breaks just a little. And you learn. NEVER start a book without 1. first knowing whether it's part of a series and 2. that you can acquire the rest of the series.

Maybe your life was settled and you grew up in some rarified place where books were as important to your family as they are to you. If you did, you could generally be sure that if you developed an addiction to a series that was still being written (as opposed to one already completed) you'd be able to get a hold of the latest in the series when it finally came out. Those of us without such assurance, at the mercy of library systems without our loyalties to long-running series, learned never to start a series until it was finished and all the books in the series were available.

This is the long way of saying I strongly favor writing stand alone books, which is amusing, because everything I have is part of a series or leaves the door open to being a series. Funny how the world turns, isn't it?

As it happens, at the time that Enemy Within sold, series were THE thing. I'd written the book as a stand alone. Straight up, I admit that I did. And then my editor asked if I could make it a series. I was still so afraid someone would take back that publishing contract, I said that of course I could. So I did. Same thing happened with Nightmare Ink, though I wised up before I wrote that one and I planned it out as a series because I could see the handwriting on the wall. Sure enough. That same editor asked for a series treatment. At least this time around, I was ready for it. And now that I'm writing my series, I love them. I don't want to abandon them any more than I wanted to read the first book in a series I'd never find book number two for when I was a kid.

This isn't to say I don't love reading series. I do. And now that I'm an adult with my own book budget AND Amazon Prime, I can do my very favorite thing in the world: Find a series I love and buy the whole damned thing in one go. Because you binge watch GoT if you want. I'll binge read Jeffe's Twelve Kingdoms, thanks. 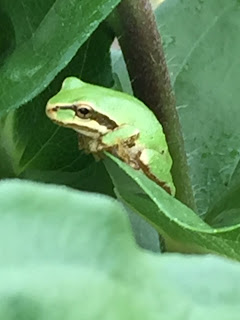 I desperately wanted a bookwormish sort of photo to give you. I don't have one. But I do have a little green garden frog who was hanging out in the zinnias yesterday. I have yet to ask what his reading preferences are.