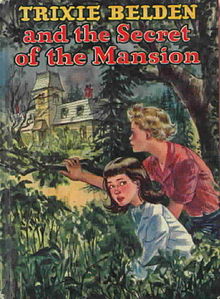 As a reader, I love series, with the more volumes and adventures the better. I grew up reading all the standard series for kids and Young Adults available at the time, starting with The Bobbsey Twins and moving on to Trixie Belden, Nancy Drew, Cherry Ames RN, Tom Swift Jr., Rick Brant, Tom Corbett Space Cadet, The Dare Boys, The Dana Sisters and even older series from my grandmother’s days as a girl (The Outdoor Girls anyone?). My family loved books and reading and my parents were always happy to buy me more to read.

My favorite treat was a trip to a giant used bookstore in nearby Syracuse NY, where I could spend hours searching out new-to-me volumes in the various series I read, as well as comic books (DC superheroes mostly,  anything scifi, or World War II like Sgt. Rock; also Tomahawk, Tarzan and the like. Wasn’t into Archie, Disney, or Marvel.)

In those days before Amazon and eBay, it was nearly impossible for me to get all the books in a series or all issues of a comic book but I did my best. Fortunately I like to reread!

In junior high school and high school I happily wrote series. My first one bears too much resemblance to Tom Corbett, I’m sure, although I added all kinds of plot elements his creators never dreamed of, including a LOT of romance. My high school years’ series might remind a reader of ‘Star Trek’, but again with all kinds of additions like a secret base under Antarctica. I had no trouble writing new installments and ongoing adventures, romances and drama. I didn’t outline then either.

(When will this deathless prose be coming to an Amazon link on your tablet? Ummm, never! It was terrific learning for me but wow, totally unreadable now!)

So why, with all this early steeping-in-series as both reader and writer, did I think I was only going to write standalone books as a published author? I had this absolute conviction I would never write a series, or at least not one that wasn’t connected, by which I mean revolving around the same Egyptian Pharoah’s court, or set in my Sectors, but with different characters. It’s not that I didn’t like the idea of a ‘real’ series, but just some mental block of my own. Since I don’t outline but am a plot-as-I-go author, I quailed at the idea of knowing today what might happen to which characters in book 5! My Muse also shuts down if I overthink a book plot too much, apparently feeling that the book is ‘done’ and there’s no need to write any more.

But I LOVE series like Nalini Singh’s (pick one, any one!) and Jeffe Kennedy’s Twelve Kingdoms and Uncharted Realms,  Lora Leigh’s Breeds, Christine Feehan’s Ghostwalkers and Sea Haven series, Ilona Andrews, Anne McCaffrey….well ok, apparently I was also intimidated at the mere idea of trying to write a series!

But I’ve been sneaking up on the goal over time. I wrote several direct sequels (Star Survivor is the sequel to Wreck of the Nebula Dream for example) and my Muse began to relish the challenge of writing an actual series. In fact, when I finish my current Work in Progress, another in the loosely connected alien empath stories, the next planned thing on my plate is ……drum roll please…..a SERIES!!! Starting with Book 1 and moving through 5 books, with a series arc and everything. WOOT! I figured out a way to outline it at a high level so my finicky, cantankerous Muse doesn’t shut down. So we’ll see. I think I’ll probably still be writing standalone stories and interspersing them with any series that I do develop, plus I have sequels percolating for some of the earlier standalone books like Escape From Zulaire,  Lady of the Star Wind and others. I hear from readers quite often that they'd really like the sequel to this book or that book, which is always highly gratifying and also a bit terrifying because I want to do justice to the characters they enjoyed.

I also LOVE my interstellar cruise liner, the Nebula Dream, so there will always be new stories set on board, with old friends and new ones.

So I guess my Muse accepts challenges after all! 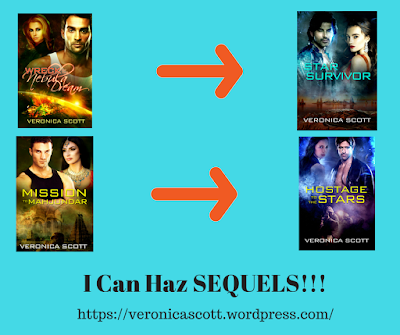