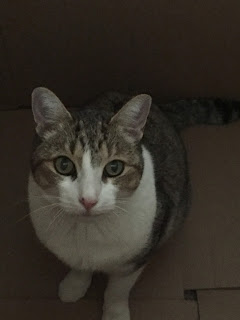 This is my last post as a Pacific Northwesterner. By this time next week, I will have relocated to Florida. As you can see, Hatshepsut is very keen on 'helping' with the packing. We're almost done and the moving truck is filling up. I am so tired.

Packing a moving truck is an art. Think Truck Tetris. Or huge, fragile jigsaw puzzle. It's very much like putting a book together. Every book has scenes and characters and arcs. Motivations and conflicts. Those come in varying sizes and weights. The ones I can't lift have to act as the anchors to all the other bits and pieces. As the biggest, heaviest segments settle into place in a story, I have to juggle the smaller ones, slotting them into the perfect place for them. In a moving truck, I do that so the load doesn't shift and break everything. I guess stories work the same way. The pieces interlock. They prop one another up and keep the structure from collapsing under its own weight.


I wish I could talk about whether or not I'm tempted to cave to fan pressure about how a story goes down. But I'm honestly not in that position. I've had a grand total of one, count 'em one, protest about how one of my books ended. And at that point, the book was in print. So it wasn't as if I had an option to change that one to suit the reader. Would I if I had readers beating down my doors over a story?

Probably not. I cannot rearrange a story - shift boxes around - without risking the whole thing collapsing and breaking. That plot twist readers hate is, for me, the ONLY thing that will fit in just that spot in the story. It supports and props up the rest of the stuff that gets piled atop it. But hey. Never say never, right? Who knows what I'll do when faced with a mob of annoyed readers brandishing torches?

Where I DO bow to reader demand right now, though, is in what book to write when. Well. Kinda. I've had a number of readers after me for the conclusion of one of the series I write. Not that I didn't WANT to write it - but eh the rights are mine again and here we go.

So. Sunnier climes ho. When someone yells at me in protest over a plot point, I'll let you know whether I cave or fight back. In the meantime, break out the sunscreen and shades. We're palm tree bound.