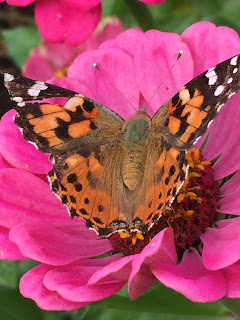 The picture has nothing to do with the subject today. It's just the season for butterflies in the zinnias and I was lucky enough to be out there with a camera when this one flitted in to have a snack.

World building, huh? Well. I have a theory.

Fandom is the gateway drug to world building (and often to writing . . .)

Pretend for me that I'm not the only one so invested in a fandom or twelve that I tell myself stories inside the world of whatever story/movie/book/game du jour that I love. I mean, you have a thing you love. Maybe it's Dr. Who, or Anime,  or Star Wars, or Sponge Bob. I don't know and I don't judge. Much. But after you've binge-watched all you can binge-watch, what happens?

If, like me, you go into immediate withdrawal, you probably start daydreaming yourself onto the bridge of the starship Enterprise. Or into some tiny New England sea-side town mysteriously afflicted by madness and rumors of something terrible lurking beneath the surface of the waves. If you do that, you're world building. If you've ever shipped a non-canon partnering in that thing you love, you're world building. Sure. Both are on a small scale and in someone's pre-built world. But you are and you know what they say. The first taste is free.

It's a slippery slope. First you're playing through mental movies of you starring in that thing that gives you life, the next, you're resentful of the restrictions that come with working inside someone else's constraints. I mean it's a stupid rule that Sponge Bob can't fly, right? So you shift worlds - you create a new construct, one that's all your own, one that won't hold back your imagination. The world you create may be based off of something that already exists - whether book, game, TV show or movie, but you'll have tweaked it to suit you. And that's it. You're hooked on world building. You're spending your time debating the finer points of whether magic that requires blood makes the mages of your world vampires and if it doesn't, where exactly IS the line between blood mage and vampire? (Do they ever cooperate? Share blood recipes, maybe?)

World building is a game, one that begins with 'what if?' and ends in narrative structure, conflict and some kind of resolution. You mix and match and create something wholly new. Like a mad scientist. Oh. Oh. Do you suppose this makes one of us here the Walter White of fiction?