An Audience of One: Worldbuilding Easter Eggs I Plant to Entertain Myself 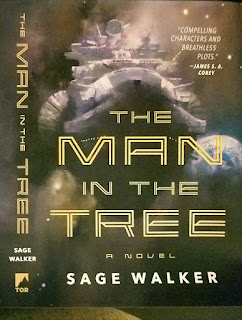 Yesterday I did a signing with Sage Walker whose book, THE MAN IN THE TREE, just came out last week. This is a gorgeous science fiction novel that I highly recommend. For the purists, the science is impeccable. An asteroid is equipped with propulsion and manipulated to create a living space inside that will eventually be a self-sustaining biosphere with a population of 200,000. By the time this generation ship reaches its planetary destination in 200 years, those people will be ready to colonize the new world. But when the story begins, the ship, Kybele, is nine days from leaving orbit with a population of 30,000 people. These people are the best of the best, who've worked and struggled to be among those granted a position on the Kybele. None of them will live to see the new planet, but they'll live and eat like billionaires during their time aboard ship - and give their progeny an opportunity like no other.

Except a man has been found murdered. Unless they find the murderer before leaving orbit - a meticulously timed departure - they'll be taking someone twisted with them. Someone who may have sabotaged Kybele herself. And the guy in charge of tracking down the murderer may be in danger of falling in love with the chief suspect.

One of the things I really love about this book is all the worldbuilding work Sage put into it. Not all of it is on the page, but it's all there in the supporting framework. Hearing her discuss the details is amazing. (Yes, she's a friend of mine.)

It's not all on the page because the reader doesn't need to know everything the author knows. In fact, if an author puts EVERYTHING about the world on the page, it bogs the book down beyond readability. However, the author still needs to know it, or the world comes across as tenuous, false, or hollow. Worst case scenario, fundamental contradictions may be missed.

Really, as I said above, a ton of worldbuilding never makes it into the story. But this topic is asking which bits we do purely to please ourselves.

I'll tell you mine. I slip in little homages to authors I love. Or sometimes to work by friends. I named a castle seamstress for an author friend who helped me with that scene. I borrowed a cameo appearance of a fantastic bird from one of my favorite fantasy books. I chortle to myself as I sneak in jokes that are so inside I doubt anyone would ever get them besides me.

Sometimes I imagine some future scholar ferreting out some of these references. Others I know no one will ever "get." And that's okay. It's mostly me, having fun with the thing I love to do.

But if you all ever suspect you've caught one, be sure to let me know!

Email ThisBlogThis!Share to TwitterShare to FacebookShare to Pinterest
Labels: fun, gaps in the world, Jeffe Kennedy, Sage Walker, The Man in the Tree, worldbuilding