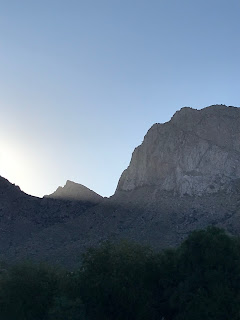 The sun cresting Pusch Ridge in Tucson, spilling light through the cleft at sunrise - so beautifully dramatic.

I came to Tucson to give the Saguaro Romance Writers my workshop on Defying Gravity: Writing Cross-Genre and Succeeding Anyway. They're a terrific group and we had a great time. This week's topic at the SFF Seven is Make a Meme: You vs. Your Protagonist. And I... just can't do this. I'm staying at my mom and stepdad's house in Tucson, and my mom says she thinks memes (she pronounced it may-may) are silly and I should tell all of you that.

I admit I'm not a huge fan of memes either - and I don't really think of my protagonists as other, so I'm coming up empty on that one. However, I thought I should let you all know that the SFWA Fantasy Storybundle sale is almost over - ending November 2 at midnight ET! Last chance to buy four books for $5 or twelve books for $15! My book, LONEN'S WAR, is part of the core four books, so here's a little excerpt of that, if you'd like to check it out!

Lonen had seen many strange things in the past weeks. Impossible magic and horrific deaths that would take him years to purge from his nightmares, if he ever could.
If he lived that long.
The sight of the woman in the window hit him with enough force to unbalance him. Through the blood-drenched night, he’d kept focus on one kill after the next and only on that, much the way he’d climbed the wall, except that he slit the throats of defenseless women, one after another, instead of reaching for holds. They died so easily, seeming oblivious to his approach, focusing their placid attention outward to the battle where the booming assault of the sorcerers diminished and ceased as their sisters succumbed to the blades of Lonen and his men.
The fact that they didn’t fight back, that they remained so vulnerable, sickened him, each death layering on unclean guilt that he’d ignored until the vision of the woman in the window knifed into him like an unseen blade. Maybe it was because her fair coloring was so much like the first woman he’d killed. After that one, he hadn’t looked at their faces, taking the dispensation offered by their featureless masks.
For whatever reason, the sight of her gripped him, standing in the open window, illuminated by candlelight in an otherwise dark tower that rose from a deep abyss. Her hair shone a copper color he’d never seen on a living being, like a hammered metal cloak that shifted with her startled movements. She put a hand to her throat, eyes dark in her fine-boned face. A creature from children’s tales perched beside her, staring at him intently. He would have thought it a statue carved from alabaster, but it swiveled its head on its neck to look at the woman, then back to him.
Lonen had seen illustrations of dragons in his boyhood books, but they’d been huge and…fictional. This thing looked very like those, only smaller—maybe as long as his forearm, not counting the tail. All white, it shimmered in the bright torchlight from the walls much as the woman’s hair did. It sat on its haunches, taloned feet clutching the stone windowsill, bat-winged forearms mantled. Large eyes with bright green shine dominated a wedge-shaped head with a narrow jaw and large ears. It lashed its long, sinuous tail against the stone, as a cat watching birds would.
Beautiful, both of them, and as fantastical as if they’d stepped out of one of those storybooks. The wonder of the sight swept away all the bloody horror. She was the bright face of the terrible magics—something lovely, pure and otherworldly. Something in him lunged at the prospect of such beauty in the world, a part of him he hadn’t known existed. Or rather, a part he hadn’t thought survived from childhood. That sense of wonder he’d felt looking at those storybook illustrations, long since lost to the grind of the Golem Wars. He lifted a hand, not sure what he meant to do. A salute? A greeting?
“Prince Lonen!” Alby ran up, bow in hand. “Why do you—a sorceress!” He reached for an arrow and notched it, a smooth, practiced movement that Lonen barely stopped in time.
“No,” he commanded. “Stand down. She wears no mask. She isn’t one of them.”
“They’re all the enemy,” Alby insisted through gritted teeth, resisting Lonen’s grip. “She’s seen us.”
“It doesn’t matter.” Abruptly weariness swamped Lonen. Far too soon for him to wear out, as much remained to be done. That bright bubble of the fantastic had distracted him, the shattering of that brief moment of childlike wonder more painful for the sudden loss of it. He’d have been better off not feeling it at all. “Her people are largely dead, their defenses falling around them. Look out at the plain.”
Alby followed his nod. Grienon, enormous and low in the sky, waxed toward full, shedding silvery light on the quiet field. None of the magical fireballs or earthquakes thundered through the night. The golems had dropped like corn stalks after harvest. The Destrye forces moved in a familiar cleanup pattern, groups of warriors methodically searching the field for the dying, to either save or dispatch, depending on which side they’d fought for—and if they could be saved. Other groups remained in pitched battle, but the Destrye had the upper hand. Without their magic, the Bárans would eventually fall.
For as many years as they’d worked towards this day, Lonen had expected to feel jubilation, triumph, the roar of victory. Not the drag of exhaustion and regret. Their plan had worked far better than any of them had dared to hope—and yet only bleakness filled his heart.
The copper-haired woman’s fault, for showing him a glimpse of a dream of something more than monstrous death and destruction. He’d been better off hoping simply to live to the next moment, or not to die in vain.
Hope and the promise of wonder could destroy a man’s spirit more surely than a well-wielded blade.
With one last look at the woman in the window, he turned his back on her and her false promise. “Come, Alby. Let’s find a ladder or stairway down to the city inside the walls, so we can open the gates.” One that wouldn’t plunge him into that dark abyss. “There must be stairs or ladders that the sorceresses climbed. By sunrise, Bára will be ours.”
Soon he would be done with this evil place.