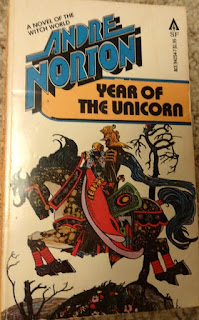 The topic this week is which authors, living or dead, I’d want to be in a dream anthology with. I’m going to twist it a bit and tell you which worlds by which authors I’d LOVE to be invited to play in (and then I’ll talk about an anthology below).

First and foremost is Andre Norton. She used to do collections where other authors were invited to write stories set in her Witch World universe and I SO longed to write a story there. I’d probably have written something about the Were Riders because I was always fascinated by them, and their mysterious backstory.

Second would be Nalini Singh. I’d be so honored to write a story set in any of her worlds. I probably gravitate to the Psy-Changeling storyline the most, if I were trying to write a tale for her universe – I’d write one very sexy emotionless Arrow and the heroine who thaws him out…but I’m also fascinated by the Guild Hunter series. Nalini writes more dark and violent themes than I tend to, especially for the Guild Hunter series, but I would find a way to incorporate those elements if I had the chance to ‘play’. Archangels, angels and vampires - oh my!

I enjoy everything Ilona Andrews writes but I’m a permanent ‘guest’ of the Innkeeper Chronicles series (meaning it’s my favorite of theirs – I probably tried too hard to make that oh-so-clever comment work, huh?) and I’m not positive I could juggle all the scifi and fantasy elements as smoothly as the husband and wife writing team does, but I’d sure try. 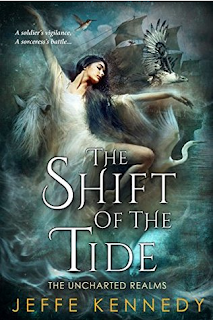 I’d also love to be invited to spin a story set in our own SFF7-member Jeffe Kennedy’s Twelve Kingdoms. There’s so much rich material to work with there, it’d be hard to pick just one theme and settle to write it. I think I’d want a Dasnarian mercenary hero and the heroine would be an everyday woman who gets caught up in an adventure…uh oh, I’m plotting! Sorry, Jeffe!

And to round out my dream list of anthologies I’d want to be invited to (or Kindle Worlds if such things were happening), may I please set a story on Anne McCaffrey’s Pern? I want to write dragons and riders and fighting Thread!

As it happens I am in a scifi romance anthology with a few of my favorite SFR authors and it releases this very week! Here’s the info:

Blurb for Embrace the Romance: Pets In Space 2:
The pets are back! Embrace the Romance: Pets in Space 2, featuring twelve of today’s leading Science Fiction Romance authors brings you a dozen original stories written just for you! Join in the fun, from the Dragon Lords of Valdier to a trip aboard award-winning author, Veronica Scott’s Nebula Zephyr to journeying back to Luda where Grim is King, for stories that will take you out of this world! Join New York Times, USA TODAY, and Award-winning authors S.E. Smith, M.K. Eidem, Susan Grant, Michelle Howard, Cara Bristol, Veronica Scott, Pauline Baird Jones, Laurie A. Green, Sabine Priestley, Jessica E. Subject, Carol Van Natta, and Alexis Glynn Latner as they share stories and help out Hero-Dogs.org, a charity that supports our veterans! 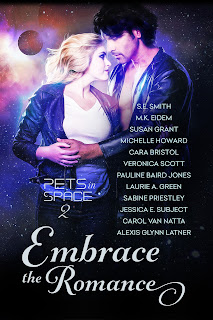 10% of the first month’s profits go to Hero-Dogs.org. Hero Dogs raises and trains service dogs and places them free of charge with US Veterans to improve quality of life and restore independence.

Blurb for my story - Star Cruise: Songbird:
Grant Barton, a Security Officer on the Nebula Zephyr, is less than thrilled with his current assignment to guard an Interstellar singing sensation while she’s on board the ship. It doesn’t help that he and his military war bird Valkyr are dealing with their recent separation from the Sectors Special Forces and uncertainty over their future, with their own planet in ruins.

Karissa Dawnstar is on top of the charts and seemingly has it all – talent, fame, fortune and devoted fans, but behind her brave smile and upbeat lyrics she hides an aching heart. When a publicity stunt goes wrong, Karissa finds herself in the arms of the security officer assigned to protect her – and discovers a mutual attraction she can’t ignore. 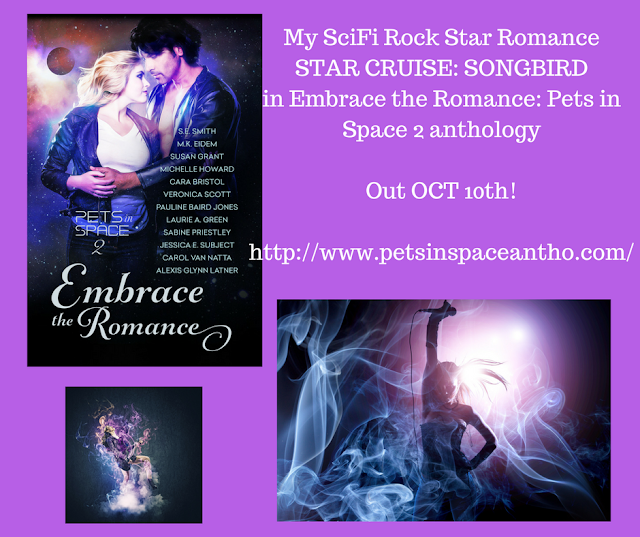