Trigger Warnings - Do We Need Them? 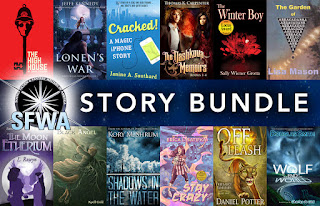 The first SFWA Fantasy Story Bundle has been selling like hotcakes! Which...how DO hotcakes sell, anyway? Maybe fast before they cool off too much. But these stories will keep. For only $5 you get four full-length novels and for $15 total, you can get all twelve. Keep them forever and read at your leisure! A great way to discover new-to-you authors while supporting both those authors and the Science Fiction and Fantasy Writers of America, who does so much to advocate for the genre and the profession. The first book in my Sorcerous Moons fantasy romance series, Lonen's War, is a part of the bundle.

Our topic this week at the SFF Seven is Trigger Warnings: When Subject Matter is Controversial.

This topic itself has become somewhat controversial in recent years, almost worthy of a trigger warning right there. The thing is, "controversial" doesn't equate to an actual trigger. The term comes from mental health circles, where "triggers are external events or circumstances that may produce very uncomfortable emotional or psychiatric symptoms, such as anxiety, panic, discouragement, despair, or negative self-talk." (Reference) Thus a "trigger warning" is intended to advise people with mental health issues of this variety that they may want to steer clear of the content. For example, a fictional rape scene might come with a trigger warning to advise victims of rape that reading could adversely affect them.

However, the term - as can be witnessed by the wording of our topic - has come to be associated with anything controversial in any way. The term "triggering" has become part of the modern lexicon for any topic that elicits a strong reaction. Or even a response that's out of the ordinary.

The thing is... art SHOULD elicit a reaction. Certainly out of the ordinary. Hopefully a strong one.

Sure, a lot of our entertainment is designed to be soothing, to lull us back into a level of numbness where we don't have to think or feel. With that sort of thing, mild is best. TV sitcoms strive to be amusing without being controversial in any way. The edgier comedies have more divided audiences, with equal numbers hating the show as love it.

Genre fiction is often escapist, yes - but I think the best kind also stirs grand emotions and ideas in us. That's what I love best, when a book moves me and makes me think about things I normally don't. But that's not being triggered.

I'm blessed enough to be more or less trigger-free. I have my hot button, sure, but I know what most of them are and I'm able to manage my responses for the most part. For people with actual triggers, I do try to be aware of what those might be and warning people appropriately. That's the compassionate thing to do.