Backlist Love For Wreck of the Nebula Dream 'Titanic in Space' 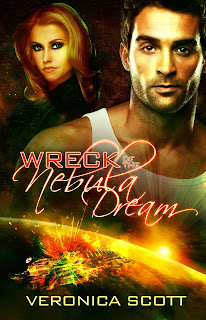 My first two books were published six years ago, in January 2012 (Priestess of the Nile from Carina Press, a Harlequin imprint) and Wreck of the Nebula Dream in March 2012, self-published. I decided for this post, since we're midway between the two, to feature Wreck today, partly because scifi romance and self-publishing have been my primary career path since that time. Although I did meet Jeffe as a direct result of having been published by Carina…and she introduced me to Marcella…and here I am on SFF7 (although that development happened a bit later.)!

I enjoyed writing about the Nebula Dream so much (although I destroyed her) that I’ve since written several books set on a more fortunate interstellar spaceliner, the Nebula Zephyr.

Here's the background of Why I Wrote Wreck. (Portions of this post first appeared on Pauline B. Jones' blog.):

Since I was a little girl, I’ve always been fascinated by stories set during a disaster – the events, how could the characters have known or sensed what was about to happen, what do they do, what could they have done, what would I do…Growing up in Upstate New York, the closest I personally got to disaster as a child was probably digging unreinforced snow forts!

But, the family legend is that my maternal grandfather had a cousin who survived the sinking of the Titanic in 1912. (I’ve since decided after a lot of searching around on the internet that she was probably not a relative, despite the unusual last name.) And as a result, I was thoroughly intrigued with that disaster in particular. I think after I’d seen the 1950’s movies about the sinking – “A Night to Remember,” which goes pretty much straight from the nonfiction book of the same name, and “Titanic,” a sudsy tragedy with Barbara Stanwyck – I was thoroughly hooked. (Saw them on late night TV folks, not in the 1950’s theaters LOL.). I devoured any account of the sinking. I read books and sought out movies about other disasters as well, both natural and manmade, like Pompeii and the Sepoy Rebellion and Apollo 13…

But Titanic is the epitome of disaster. Premonitions. Too much speed  on a clear night. Too much trust in the unsinkable technology. So many people, too few lifeboats.  The wireless operators staying at their posts, talking to the world on the internet of its time, Marconi wireless, yet no one could help. The Carpathia driving through the Atlantic, knowing they’d arrive too late. The Californian ten miles away, able to save everyone, yet unaware of the tragedy.  The musicians playing. The brave officers.  The lovers separated. Or staying on board together to drown.  The popular captain who’d never actually been in a sinking situation. The corporate executive who steps off the sinking ship into the last lifeboat and spends the rest of his life reviled. The steerage passengers, kept below too long. The rich, the famous, the children… I mean, the dramatic elements go on and on, yet it was all very real, and extremely sad.

Now I’m a writer obviously and I’ve done so much research into Titanic over the years, you might expect me to have written a novel set on that ship. Well, but for two things. First of all, I feel Titanic is complete. Not to say I won’t keep reading books about it and watching movies and TV mini series set aboard the ship, but as a novelist, it feels done. My Muse isn’t inspired to go there. Which leads me to the second point – my Muse likes to write science fiction adventure/romance, with Special Forces operators and smart, gutsy women, in dangerous situations. So it was probably inevitable that all that Titanic inspiration would turn into the catastrophe that strikes my Nebula Dream in the far future. I just had to figure out why my military hero would be traveling on such a ship. Once I knew that answer, I was off to write.

I looked to the events of Titanic for inspiration, not to do a literal retelling out in interstellar space. My plot includes science fictional things that would never happen in the cold North Atlantic. (No spoilers here!) But I also deliberately included two children among the small party trying to survive – Paolo and Gianna, who for me symbolized the many children who sadly perished on Titanic. There are some other subtle nods to the events of Titanic and a few outright similarities – the Nebula Dream is the newest, most advanced cruise liner of her time, with new engine technology, her captain and the company’s representative out to make a speed record at all costs…until….well, that would be  the story, now wouldn’t it?

The blurb: Traveling unexpectedly aboard the luxury liner Nebula Dream on its maiden voyage across the galaxy, space marine Captain Nick Jameson is ready for ten relaxing days, and hoping to forget his last disastrous mission behind enemy lines. He figures he’ll gamble at the casino, take in the shows, maybe even have a shipboard fling with Mara Lyrae, the beautiful but reserved businesswoman he meets.

All his plans vaporize when the ship suffers a wreck of Titanic proportions. Captain and crew abandon ship, leaving the 8000 passengers stranded without enough lifeboats and drifting unarmed in enemy territory. Aided by Mara, Nick must find a way off the doomed ship for himself and several other innocent people before deadly enemy forces reach them or the ship’s malfunctioning engines finish ticking down to self destruction.

But can Nick conquer the demons from his past that tell him he’ll fail these innocent people just as he failed to save his Special Forces team? Will he outpace his own doubts to win this vital race against time? 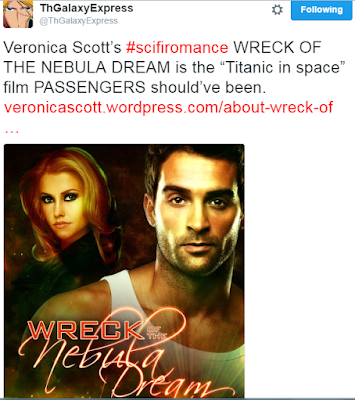