Why You Haven't Written the Novel That's in You 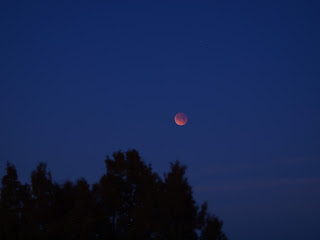 Another photo of the lunar eclipse as the full moon set over Santa Fe.

Our topic this week at the SFF Seven is "Why do you think people DON'T write?"

It's a different take on a familiar topic. Because all writers hear - and, I confess, dread - the standard line from people: "I've always thought I had a novel in me, if I had the time to write."

Or some variation on this. Almost every person who says they want to write a novel and hasn't blames not having the time to do it. Which makes the person who HAS written novels want to throttle the person speaking. Maybe very gently - just a light squeeze to the larynx to stop those hated words.

Because here's the deal: WE ALL HAVE THE SAME AMOUNT OF TIME.

No, no - don't start explaining or making excuses or mentally going over your incredibly tight schedule. I'm sure your days are packed. I don't doubt that you don't have an empty three or four hours - or whatever it is you think you need - to write in. None of us have that. Nobody I've ever known has had HOURS to kill every day, with absolutely nothing to fill them, so they might as well write a book.

Except maybe people in prison? I dunno - seems like they're kept pretty busy, too.

People don't like being idle. We're not built for it. If we don't have work to do, we like to be entertained. If we do a lot of work, as many people do, then we need to be able to relax in between. We need to sleep, to eat, to take care of children and the elderly and the infirm. We have homes to maintain, pets to nurture, volunteer obligations that are important to us.

I'm going to let you in on a secret that isn't much of a secret: occupations are like gas - they expand to fit the available time.

This means that, your allotted 24 hours a day will always be filled. If you have empty hours for some miraculous reason? They'll get filled. Nature abhors a vacuum, yes? Empty time sucks other things into it.

So, the reason these people haven't written their novels - or short stories, or poems, or essay, or what have you - is NEVER because they don't have the time. It's because they chose to do something else with that time.

Now, I'm not going to pretend making time to write is easy. It's not. In fact, I suspect making time to write is harder than making time to do most anything else. That's because it's solitary, it's producing and contributing nothing to the world apparently (maybe for a long time), and it looks to other people like you're not doing anything at all. Except maybe taking away from the stuff they approve of you doing - like stuff that benefits them.

Decide to start an exercise regime? Look at all the people at the gym doing the same thing! You come home sweaty? You lose weight and get stronger. All awesome observable stuff.

Take up gourmet cooking? People are so happy with you! Yummy food for all!

Get a second job? Wow, you're not around as much, but yay for more money! And the people at the job are happy you're doing stuff they need you to do badly enough that they'll PAY you to do it.

Start writing a novel? None of these things. You take time away from other stuff, nothing happens for a long time, and - because writing is difficult, mentally and emotionally draining - you probably won't even seem happy about it.

When most of us start writing, the time we make - that is, steal from another part of our life - is usually from something that was fun and relaxing. It's hard to cut out the things we need to do to live, like cooking food and making money. So we steal from reading time, or movie-watching time, or gaming time. Then not only are you trying to learn a New Thing, which is tedious and draining, you've also lost the things that made you happy.

It's really hard to get through this phase. Especially if the people who love you are saying, "Not only do I see you less, but you also seem miserable. Are you sure you want to do this?"

Yes. Yes, you really do.

Writing might be the most delayed-gratification project I've ever engaged in. But the rewards are worth it. IF you stick through all the garbage and difficulty. And that means well past the publication of your first book, or even the first ten.

I can vouch that making a living as a writer is even BETTER than I imagined it would be.

So: MAKE THE TIME TO WRITE.

Beg, borrow, and steal the time! Don't wait for the day that never comes, when time to write magically falls from the sky.

TAKE THE TIME AND SQUEEZE EVERY DROP FROM IT.

I believe in you.