On My Mind This Week: Dogs 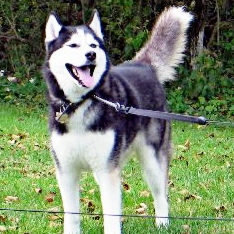 Huzzah! It's the Year of the Dog! Huzzah!

For a dog-lover like me, it's a good sign. Except...well, last year I had to say goodbye to my beloved husky. He was 15, a rescue who'd put up with me and my weird for 14 of those years. He'd started life as the hot-potato dog, bouncing through four homes before landing in mine. He settled in rather quickly, leaving us birds in our slippers. In the inimical opinion of my Samoyed who'd joined the family first, the husky was...tolerable. He enjoyed long walks but was afraid of sewer covers, puddles, and thunderstorms. He routinely dug up moles then tried to convince the poor traumatized things to be his playmates (they declined as politely possible). Whenever I was on the phone, he would include himself in the conversations. He would never steal food off the table (not even the coffee table), but he would sneak it out of your hand if you happened to be distracted. He loved people. A guard dog, he was not.

Eventually, time does what it inevitably must. Not since grad school have I been without a four-footed companion. (I assure you, that's longer ago than I want to consider.) I've completed the painful parts of grieving and progressed to happy memories. For some months now, I've auditioned this strange freedom from responsibility for another life and have come to the conclusion that being dogless is no fun.

There are millions of dogs in need of homes. Their great big eyes and pleading expressions pulling at all the heartstrings. Oh aye, adoption is an option. Especially when you're looking for a dog who's aged out of his puppy years.

I came close to bringing home a big floof who'd been abandoned at the start of the winter holidays, but, darn it, I showed up at the shelter mere minutes too late. However, when a pup lands in a happy furever home, I'm happy...even if the home isn't with me.

My second attempt was a huge adoption event put on by area shelters and rescues. We're talking hundreds of dogs. Thousands of people showed up. Over 800 animals joined new families. Alas, mine was not one of them. Seeing the joy on faces young and old as they received kisses of gratitude from their new pets? Priceless.

Oh, but then, but then I found a breed-specific rescue one state over that has multiple blue-eyed shedders in need. Yes, yes, I promptly submitted my application. Yes, yes, it takes time for volunteers to vet applicants. Yes, rescue leagues are far more particular than shelters.

Dear reader, I finally discovered the one thing that'll make me refresh my inbox more often than queries and submissions--rescue application approval.

So that is why dogs are on my mind this week.

Email ThisBlogThis!Share to TwitterShare to FacebookShare to Pinterest
Labels: Dogs, KAK, On My Mind, Rescue Me