Why You're Not Writing 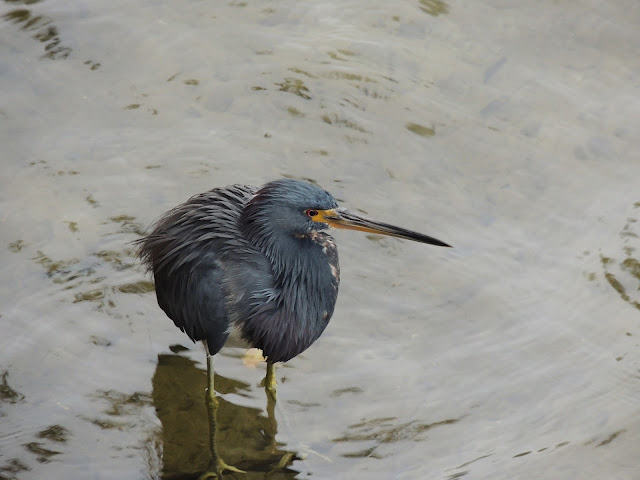 Just a little blue heron for you today.

Full disclosure: This week's question was mine. That's because so many people tell me they want to write a book but they have no idea where to start. Or that they actually started the book and then read one on the same subject that was so good and they could never, ever do that well so they quit and gave up writing. I have an email file full of responses bleed pain all over my Outlook folders from people who knew what they wanted but believed themselves inadequate to the task of going and getting what they wanted.

Most of these people are women. (I did ask guys, too, I swear! But guys mostly denied every wanting to write books. Of the few who responded with wanting to write, every last one had also given up.)

So. Why aren't these people writing that book?

1. Because they're confused about what writing is.
Those of us who DO write have come to figure out that it's a multiphase process that in its first stage requires you to regress to your earliest and lamest excuse for language in order to get the bones of a story on a page. Don't believe me? Someday we'll auction off sneak peeks at a couple of my first drafts. (The price of my humiliation will be high.) They only barely qualify as language. Most of it has no caps and no punctuation. They're heavy on 'I know what I meant, even if no one else does.' That draft gets edited into something more mature. That draft goes to beta and then gets rewritten again . . . So yeah. The people notably NOT writing thought they could sit down and be, if not brilliant, at least understood from the moment their fingers touched a keyboard. They were deeply disappointed in themselves when that didn't happen. I send these people to Julia Cameron The Artist's Way - something that will ease them into viewing writing as a process.

2. They're comparing their raw drafts to someone else's finished product.
Most of us have been there. Let's pretend I was working on an 'an alien comes to earth and gets hooked up with a group of kids' story. And then ET came out. On the big screen. With a John Williams score and cinematography that plucked every emotional string I had and a few I didn't know I had. Where do you suppose that alien story *I* was working on went? Right. Straight under the bed. Get it back out. Write that alien. Write those kids. Ya know. If the plot is too much like ET, change it up. But your telling of the alien stranded on earth is going to be different because of your voice - that's what readers buy. Oh! You thought it was the story? Or your lovely prose? Nope. Not saying those things don't help - but no one cares if there's a typo on page 612. Your readers care whether your story connected with them emotionally. Did it make them feel anything? If yes, you win. If no, well, you won't likely sell many copies. Readers pay you to make them feel something. Lots of writers who write about writing address this. So I hand over my copies of Anne Lamott, and Stephen King.

3. They're afraid.
We live in a society that demands there be a right answer and a wrong answer. It is the basis of our educational system. It's etched pretty deeply into our psyches when we're young. Most of us have a dreadful relationship with failure. No matter how many inspirational memes we paste on the mirror telling us that failure means we're learning, we've internalized the message that failure means we're bad human beings. Even how we talk about it brands US as failures rather than our endeavors. (We say "I tried and failed" rather than "I tried and the thing I tried failed.") Writing fiction, by definition has no right and no wrong. There's only a story to be told. That's stepping pretty far outside societal conditioning there, pal, you sure you wanna leave the pavement that way?? So that aspect is scary enough. Then you have to deal with the fear of spending all that time and all that effort only to have everyone hate what you did. Or worse yet, roundly ignore it. Those things are pretty fail-y, aren't they? And that kind of perceived rejection is mighty threatening to a social beast like humans. I honestly don't have resources to offer on that one. Nike ads notwithstanding.

If you have any suggestions for assuaging or coping with that fear, I'd love to hear it. A couple of the women have glorious minds and amazing stories to tell. I'm invested in not letting the stories die with them.

Email ThisBlogThis!Share to TwitterShare to FacebookShare to Pinterest
Labels: Anne Lamott, Fear, Julia Cameron, Marcella Burnard, Stephen King, The Artist's Way, wanting to write, what is writing, why you're not writing