Should anyone attempt to search out my first two books, they'll find the books are no longer available. This is because the rights reverted to me. Yay. The books are undergoing a minor face lift while I write book three. Then books four and five.

I no longer own the awesome covers Berkley gave Enemy Within and Enemy Games. Had to go out and get my own. Which I did. Haven't shown them to anyone else, but what say we plunk the new ones down here for your perusal? The covers aren't final. So if you have suggestions, bring 'em. (besides getting the stock photo watermark out of the Enemy Games cover) The series title it going to change to The Chekydran War, since this series follows the arc of said war. 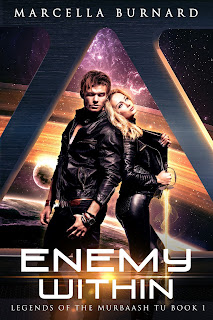 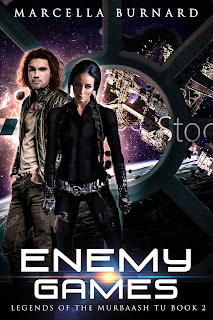 The third book is tentatively titled ENEMY STORM. No cover for that one yet. It is THIS CLOSE to going off for edits. Not that I'm anxious for that.

On the off chance anyone has forgotten what this pair of SFR books was about, here are the descriptions:


An escalating intergalactic cold war.
A  starship captain clinging to her shattered past. A pirate with an empire to protect .
An inhuman adversary.
And a threat beyond the scope of the imagination.


After a stint in an alien prison followed by a torpedoed military career, Captain Ari Idylle has to wonder why she even bothered to survive. Stripped of command and banished to her father’s scientific expedition to finish a PhD she doesn’t want, Ari never planned to languish quietly behind a desk. She wasn’t built for it, either. But when pirates commandeer her father’s ship, Ari once again becomes a prisoner—this time of pirate leader Cullin Seaghdh, who may not be at all who he pretends to be. As far as Cullin is concerned, the same goes for Ari.


Ari’s past association with aliens puts her dead center in Cullin’s sights. If she hasn’t been brainwashed and returned as a spy, then she must be part of a traitorous alliance endangering billions of lives. He can’t afford the desire she fires within him. His mission comes first: that he stop at nothing, including destroying her, to uncover the truth of her mission.


Besieged by an inhuman adversary.
Betrayed by their own kind.
A scientist and a spy, sworn enemies allied by danger, bound by passion.


Kidnapped while combating a devastating plague, Jayleia Durante fights to resist Major Damen Sindrivik, an officer from a rival government’s spy corps. With her spymaster father missing, and mercenaries hot on her trail, Jayleia must align with the magnetic, charming, manipulative spy. She must not lose sight of the fact that his single-minded agenda is for the protection of the empire - not her, not her people.


Damen knows a shadowy network of traitors has allied with the violent, insectoid Chekydran, and that Jayleia’s father holds the key to dismantling that web. She becomes his only lead in a circuitous round of hide and seek. Too bad his instincts tell him Jayleia is lying to him. Nearly as much as she's lying to herself.


Unless Jayleia can decide what matters most: ending the war or Damen’s love, they’ll become the prey of the traitors they stalk, and one species’ civil war will consume the galaxy.


Don't forget to let me know whether you love or hate the new covers (and why, please, if you hate them - so I can fix them.)