I'm Nuts Enough, I Do Not Need an Unreliable Narrator's Help 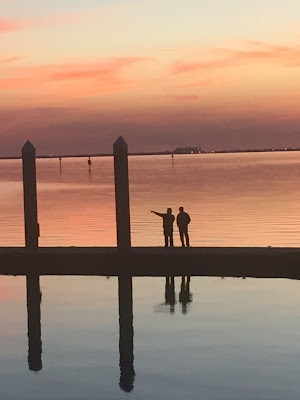 Yesterday was my father's birthday. January 31st. He wanted to have dinner at a tiki bar. So we found something that was on the water. As luck would have it, we were in perfect position for the sunset over Tampa Bay.

I imagine the person pointing is telling stories - fish stories, maybe. Or tales about what lies in the direction they're pointing. Which leads us to unreliable narrators. I had been going to say I don't know much about unreliable narrators, but in fact, I now more than I want. It's just not from fiction.

I think the important thing to keep in mind about unreliable narrators is that they are giving you the truth as they see it. It's a truth they utterly believe, that they are invested in. Chances are, that even if you catch them out in what you'd swear was a dead on lie, they'll deny it to their graves. I admit this is not my favorite story trope. Maybe in part because I am not entirely certain I could pull it off as a writer. Or maybe because I knew one. For real. And I tried to be her friend. It went well. For a little while.

Let's call her Joan. There's no way to put too fine a point on it. She lied. All the time. Funny thing, there was zero malice behind it. It was 100% telling you what you wanted to hear - things like, 'I'm coming to your house to pick up the Very Important Thing you wanted me to pick up!' Then I'd get a text - 'hey traffic is terrible.' Then another text. 'Accident on freeway.' That's about the point I worked out she wasn't on the road at all. Hadn't, in fact, even left her house. Called out on it, the next lie was that she was desperately ill and had to undergo radical treatment that oddly, never had any physical impact. The final straw came when she lied to someone else to the point of attempting to impersonate someone in authority in email.

We'd gone from saying what she believed her friends wanted to hear to actual criminal activity in that last case. And yet. When confronted, she denied that any of it was a lie. Honestly, looking back, I think she believed that no one would or could like her for her. They'd only like her for what they believed she could do for them. So she'd constructed fiction after fiction and then convinced herself they were fact. But that's me. Attempting to rationalize something that may not be at all rational.

So maybe you'll understand when I say I've sort of had my fill of unreliable narrators in real life.  I don't deal with Joan anymore, but there are a few other people with tenuous grips on consensual reality that I can't avoid. And can't safely describe here. It means that since I have to live unreliable narration, I really do not want it anywhere near my entertainment.

Real life doesn't have to make sense. It's a relief to me when my fiction does make at least a little bit of sense. Am I weird here? If you like an unreliable narrator in a book, do you have people in your life who actually DO that? I'm wondering if my distaste is colored by my exposure or if everyone has had similar experiences in life and me not liking an unreliable narrator in fiction is just me.