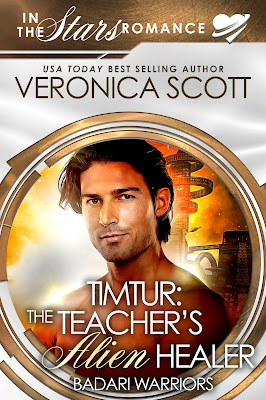 Our topic of blurbs and covers is very timely this week since I’m ready to share my next release in the Badari Warriors series!

Since the events described in TIMTUR actually occur between books 2 and 3 in the numbered series, I decided to issue the novel under the IN THE STARS ROMANCE banner, which is comprised of a great group of fellow scifi romance authors.

The blurb:
Genetically engineered soldiers of the far future, the Badari were created by alien enemies to fight humans. But then the scientists kidnapped an entire human colony to use as subjects in twisted experiments…the Badari and the humans made common cause, rebelled and escaped the labs. Now they live side by side in a sanctuary valley protected by a powerful Artificial Intelligence, and wage unceasing war on the aliens. The luckiest Badari find their mates among the humans.

Far from her home in the human Sectors after the mass kidnapping, teacher Lily Garrison is making a niche for herself in the valley by running a school for the Badari young. Although she yearns for Timtur, the pack’s healer, another Badari male has his eye on her and won’t take no for an answer.

Timtur feels the weight and responsibility of being the pack’s only healer, constantly on call as the soldiers fight ferocious battles against the alien scientists and their troops. With scarcely a moment to himself, he’s drawn to the gentle Lily but worries he won’t be able to juggle his duties, his loyalty to the pack and a relationship with a human woman.

When Lily’s stalker takes direct action to kidnap her and steal her from the safety of the valley, she’s forced to reach deep inside to find the strength to battle for her life. Timtur realizes too late how foolish he’s been to resist the bond with his fated mate and leads the rescue effort.

Before this situation can be resolved both will have to put their lives on the line and decide what really matters in a dangerous world ruled by the enemy.

Although this is the fifth book released in the Badari Warriors scifi romance series, the story of Timtur and Lily is a standalone and actually comes immediately after book two’s events. Always a satisfying Happy for Now ending for the hero and heroine, not a cliffhanger. Some overarching issues do remain unresolved in each book since this is an ongoing series but romance always wins the day in my novels!

The book is still in final edits, so this selection may be revised a bit by the time the book is released. The (first ever) excerpt: “I want you to go with me to the Alpha’s gathering tonight.” The Badari soldier stood much too close to her, crowding her against the desk.

Being alone with this aggressive young warrior in the office this late in the afternoon, gave her a bad feeling. No one was likely to come to her rescue. Lily tried to sidestep, and he put one arm out to keep her in place, boxed in between his massive body and the wall. “Thank you, but I’m already going with my sisters,” she said, trying to control her breathing. “And I’m expecting to meet a friend there.” She wished she’d followed her instincts and left the minute he stepped into the room but, at first, he’d said he wanted to talk about tutoring for the cubs. “I asked you before, Vattan, not to keep singling me out. I’m sure you’re a very nice person, but I’m not interested.”

“You should be. I’m the Generation 9 Alpha. I’ll be in charge of the packs and the valley someday, once Generation 8 dies off. Or I kill their Alpha in combat. Any human woman should be happy to have my attention.” He nuzzled her neck.

“Stop that!” Shocked, disgusted, she shoved at him but, since he outweighed her by easily two hundred pounds and had muscles like slabs of granite, her defensive gesture made no impression on him. “Please, leave me alone.” Her heart was racing and she felt like her legs could barely hold her up.

“You think I don’t know you have eyes for the healer?” Vattan gave a contemptuous snort, even as he pressed his body more closely to hers. “He’s weak. I could kill him easily in a dominance challenge.” The young alpha eyed her figure appreciatively. “But he’d never risk fighting me, even over you. You need a strong warrior to protect you on this planet.”

Trying to hold him at arm’s length, Lily debated whether to lie and say she would attend the party with Vattan. It might end this encounter, and then she could appeal to the settlement’s leader Aydarr, the alpha in charge of the pack, as soon as she was able to get away from her stalker. But the Badari could smell lies, or so it was said, and she was afraid to make Vattan angry.

Vattan reached out and snagged one of the long red strands of her hair with his talons, pulling her carefully controlled hair style into messy disarray. “So pretty. Like fire in the sunshine.”

Footsteps sounded outside, and she hoped for a rescue, although the encounter was bound to be embarrassing for her. She was terrified if no one interrupted him, Vattan was going to overpower her and assault her right here in the office.

TIMTUR: The Teacher’s Alien Healer will be released across all major ebook seller sites on October 16th. At this time there is no pre-order - sorry!