Guest Linda Robertson ONCE UPON THE LONGEST NIGHT Kickstarter

Linda: HELLO! (waves maniacally) Linda Robertson here! If you’re a fan of the SFF7 blog, you may recall I used to occupy the Wednesday slot… and I am delighted to be visiting my old stomping ground – would that be stomping blog? Blogging ground? – either way, I’m happy to be here.

I am just SOOO excited to tell you about this anthology of Paranormal Fantasy Romance. The gorgeous cover below was even a featured reveal in the USA Today Happily Ever After blog this past Thursday. I’ve provided story summaries at the bottom, so be sure to keep scrolling and check out that line up! WOW! I’m giddy to have a story among such talented authors! The kickstarter is going live soon – Monday Oct. 1st – so please, help keep the buzz about this anthology going. On Monday, follow the link at the very bottom to the Once Upon website where links to the kickstarter should be live, and consider backing Once Upon the Longest Night. There are wonderful backer prizes and incentives, too, but first, here’s that gorgeous cover: 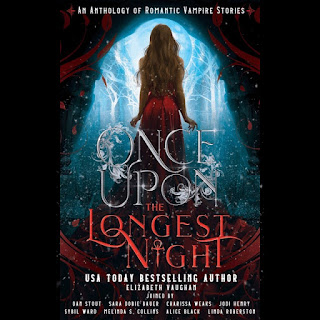 The longest night. A vampire’s delight.

The winter solstice, a time of birth and rebirth, life and death, waning light and rising darkness. A time when those who flee the sun and crave the taste of blood find their greatest solace.

But one never knows what the longest night might hold.

Once Upon the Longest Night, a collection of adult paranormal romances, features nine novelettes of lovers and their battles against one of the greatest legends of our time: the vampire. A 15th-century seaman and the love of his life come face to face with a vengeful manjasang. In ancient Rome, a hunted priestess captured by a loyal centurion offers her aid to the enemy. With the help of a handsome Royal courier, a reluctant Romanian princess braves the curse flowing within her noble blood. Danger awaits when a vampire in the far reaches of North Dakota must endure the lethal cold to protect the woman she loves. And in a future New York, a broken general returns home for the Longest Night Ball where he meets a young male witch who might change his life forever.

This anthology combines vampire mythos and affairs of the heart with the sacred symbolism and magic of the winter season.

Sit back and let us tell you a tale. Welcome to the Longest Night.

Memories of Stone by Elizabeth Vaughan: Ercula is weary, tired of fleeing, considered a monster by the Romans. But the Solstice is sacred to her goddess and she will worship at the forgotten shrine, whatever the risk.
The centurion who captures her has other plans.
@eavwriter
The Lobster Trick by Dan Stout: Jacqueline doesn't mind her job as an overnight security guard. After all, what’s the worst that could happen at a blood bank? But when an armed group invades the building, Jacqueline is forced into action to save a handsome lab tech… and discovers that his shy smile might hide a shocking secret.
@DanStout

Blooded by Linda Robertson: Miriana Jorgeta rejoiced when her distant and cruel mother, the Queen, sent her away from Romania to attend a girl's school in England. For years, she lived a life so perfect she almost forgot about the duties of her heritage. But curses rarely remain hidden, and soon, with the help of her mother's royal courier, Miriana must face the truth about what really lurks in her blood.
@AuthorLinda

His Last Battle by Sara Dobie Bauer: Suffering from PTSD, vampire general Devlin Frost returns home from the war on Lycans and attends the historic Longest Night Ball. Here, royal witch Elijah Crow must choose three immortal suitors to compete for his love and power. When Devlin is shockingly chosen as one of the three, his immediate attraction to the young witch coaxes him into entering the fray, but this battle is for more than Elijah’s love. The broken general might also win back his ruined heart and bruised soul—if he survives the night.
@saradobie

Silver Heart by Charissa Weaks: 15th Century Italy. After a decade at sea and with an inheritance in hand, Cristiano Del Valle returns to his childhood home of Venezia in search of a new beginning. What he finds on the longest night is an ancient enemy who not only threatens the life he’s long desired but the love he thought he’d lost.
@CharissaWeaks

Walk with Me by Jodi Henry: After a century of killing her own kind, Arianna Guerri retired to a place no other vampire dare go. In the deadly cold of North Dakota, she built a life for herself, and fell, secretly, in love with her best and only friend. When someone burns the small town,
Arianna must face the mistakes of her past—and her feelings—if she hopes to survive the
longest night.
@_JL_Henry

Love on the Longest Night by Sybil Ward: Neenah and Robert are searching for true love in the same place for drastically different reasons. Can they find love together on the longest night when they’re trapped by the century’s worst blizzard and one of them is a 300-year-old vampire?
@SybilWard

One Night In December by Melinda S. Collins: NYC artist, Micah Price, never believed in vampires or immortality. But after a year of researching Daniel Savoy, her family’s enigmatic annual houseguest and the only man she's ever loved, the options surrounding the truth of his past are slim at best. When a bloody Daniel arrives on Micah's doorstep, she refuses to leave any stone of the mystery unturned. But accepting that vampires exist is the least of her worries. Because sometimes it's not the monsters we should fear. It's what hunts them.
@MelindaSCollins

Find more information at:
Once Upon Anthologies