Coming Soon! THE ARROWS OF THE HEART 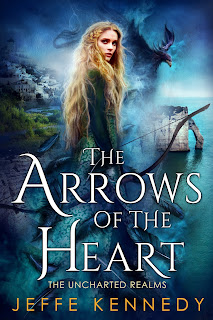 This week at the SFF Seven we're sharing a blurb from our current work in progress or a blurb from an upcoming release. Serendipitously enough, for me they're one and the same at the moment.

I just received developmental edits from my editor, Peter Senftleben, on THE ARROWS OF THE HEART. They're pretty light - yay! - so I should have those revisions turned around and out to my copy editor by Wednesday. All of this means I should be on track for my planned October 3, 2018 release date!

I'm not doing preorders for this one, so your best bet to be notified when it's live is to sign up for my newsletter.

And, because we're nearly ready to go live, I've been going back and forth with the gal who does my blurbs/back cover copy. Which means I also have that, fresh off the press. We're going to tweak it a titch more, but here's the penultimate version!

As the Twelve Kingdoms and their allies are drawn toward war, a princess cast aside must discover a purpose she never dreamed of…

Karyn af Hardie behaved like a proper Dasnarian wife. She acquiesced, she accepted, she submitted. Until her husband gave her a choice: their loveless, unconsummated royal marriage—or her freedom. Karyn chose freedom. But with nowhere to run except into the arms of Dasnaria’s enemies, she wonders if she’s made a mistake. She wants love, security, a family. She can’t imagine finding any of it among the mercurial Tala.

Worst of all is Zyr. The uninhibited shapeshifter is everywhere she looks. He’s magnetic, relentless, teasing and tempting as if she’s free to take her pleasure where she wishes. As if there isn’t a war rising before them, against a vile and demanding force far stronger than they. Thrown together in a dangerous gambit to tip the balance, Karyn and Zyr have every opportunity to fail—and one chance to steal something truly precious…

Email ThisBlogThis!Share to TwitterShare to FacebookShare to Pinterest
Labels: BCC, Jeffe Kennedy, The Arrows of the Heart, WiP, WiP blurb