Our subject yet again is planning, in the short, medium and long term. I’m not a planner of any variety. I addressed the topic as exhaustively as I can in a post here on SFF7 in April, “Planning Is Ants vs. Grasshoppers for Me”. I’ve got absolutely nothing to add so I was thinking about not posting at all today but then I decided to share a quick excerpt from one of my ancient Egyptian paranormal novels because the ancient Egyptians did plan, on the very VERY long term scale. See, so at least I can write fiction about planning LOL!

So here’s my hero Sahure explaining to heroine, high priestess Tyema, what he hopes to do in his career. 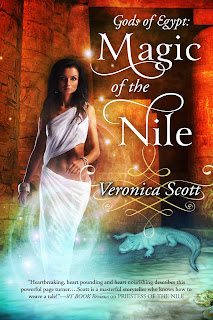 From Magic of the Nile, set in 1550 BCE Egypt…edited from published version…

“Do you know who gets to build things in Egypt? Buildings and monuments standing for all time?”

“Pharaoh,” she said, inserting a question into her tone.

He nodded. “Pretty much. Pharaoh and those he empowers or commissions to build on his behalf.”

“Like the consideration he’s giving to creating a new harbor and port city in my province?”

“If the river complex gets constructed, yes.” Sahure sat beside her, leaving a small space between them. Tyema had to fight the urge to slide closer on the stone bench and put her arm around him as he went on speaking. “In my family there’s only one career a man can follow-- the military. We’ve been soldiers going back generations. Fortunately, my grandfather and father loathed the Usurper Pharaoh, hated the way she allowed the Hyksos to have authority in Egypt, which they used as an excuse to plunder and ravage. My relatives were happy to ally with Nat-re-Akhte when he decided enough was enough. They took their battalions of highly trained soldiers into the field on Nat-re-Akhte’s behalf early in the rebellion, reversed the outcome of a hard fought, pivotal battle. He remembers that support with gratitude to this day. Members of our family have done well ever since, received honors and promotions, achieved positions of authority.”

Tyema considered his explanation, never having stopped to wonder before how the current nomarch* of Ibis Province had gained his position. “Like your uncle?”

Sahure nodded. “Yes, he was a successful general and Pharaoh appointed him to replace the old nomarch who’d given his loyalty to the Usurper. The elevation in rank was a reward for significant military victories. And as nomarch, my uncle’s gotten to build, including monuments and temples to carry his name through the ages.”

She thought she saw what he was driving at now. “Your uncle commissioned temples and government houses and a new granary--”

“Right. I want to do what he’s done, but there’s a great deal of competition at Pharaoh’s court for the positions allowing a man to leave a mark on Egypt. And I want to have a hand in actually designing what I build.” His voice was full of firm conviction.  “Not merely oversee the execution of someone else’s plans.”

Tyema was fascinated by this new insight into the ambition driving Sahure. “You said your family was a military one, though?”

“Through and through.” He nodded. “So of course I was destined for the sword and shield from birth.”

Tyema heard an undertone in his voice, as if he hadn’t been completely pleased to be born into the military strata of Egyptian society, honorable though it was. “I know a man doesn’t get invited into Pharaoh’s Own Regiment unless he’s one of Egypt’s best warriors, proven himself.” She touched the golden badge on his shoulder. “And Edekh mentioned the other night at dinner you received gold of valor for breaking the siege at Kharga. I was proud for you.”

Smiling, he captured her hand. “Thank you. Fortune and fate favored me at Kharga.”

(Note: A bit of a jump in the conversation here...)


“When I was a boy, I spent much time with my mother’s oldest brother, who was an architect. He designed the new portions of the greater temple complex.” Sahure waved a hand in the direction of the sprawling buildings on the rise. “I was fascinated by his tools, by the models his draftsmen built, by the idea of creating something where nothing had been before. As it happens, I had an aptitude for architecture and I enjoy it. Since he was working on this large commission at the time, he indulged me with the assignment to design a nook for contemplation.” His lips twisted in a wry grin. “I think he gave me the task to keep me out of his hair, but I surprised him.”

“Here,” she said, spinning in a leisurely circle to take in their peaceful surroundings.

He nodded. “My uncle did the final drawings, of course. No one but he and I knew the concept was mine. We couldn’t tell my family.”

“Because you were destined to be a warrior?”

“And I am, one of the best,” he said as a simple statement of fact. “I was born with the necessary physical skills, and I had the right training from the moment I could walk. But my greater goal is to be in a position to create for posterity, to ensure what I design is built and acknowledged as mine. Done under Pharaoh’s command of course, for the good of Egypt, but done by me, with my cartouche on the keystones.”

Not saying my entirely fictional hero designed or built any of the Egyptian landmarks still standing but at least he had long range plans...

*Ancient Egypt was divided into 'nomes', like provinces, each ruled by a 'nomarch' under Pharaoh.