Once upon a time my brother and me switched books. that is, he read one of mine and I read one of his. neither of had the least bit of interest in doing this, but we made a bet and you have to actually play in those or you can't win.

I gave him THE TALISMAN by Stephen King and Peter Straub, which is, as I have said many times, an amazing book. he gave me Herman Hesse's STEPPENWOLF.

I'd have to say it was a tie. neither of us wanted to read the other's book, but we had a bet going.

We both loved them.

That is, you may rest assured, the exception and not the rule. Mostly I don't find books I don't like.

In most cases I find there are good points to any novel. there are a few writers I can take or leave. Ask me in person and I might even tell you which ones, but for the books. I have seldom been disappointed.


On a different subject: Books coming out soon....

So me and my co-author, Charles R. Rutledge. decided to start writing the Griffin & Price series just for kicks. The process went very, very smoothly, actually. So smoothly, in fact, that we had the first draft of the first book done in eight weeks.

We had a blast. And we've continued to have a blast with the characters and world we've built up. So much fin, in fact, that we're working on a book set in the same world, and slightly to the side of our usual main characters.

But that's not why I'm here today, I'm here to say that for the first tome, well, basically EVER, all three of the books are out at the same time. See, we have a few publisher issues. As in, sadly, the publishers wither changed their approach to publishing (in one case deciding to focus on old non-fiction books about the occult, which is cool) and in one case making a few missteps in the distribution market and having to downsize substantially.

Now we have fixed the issue. Here are all three of the Griffin & Price books, with descriptions, covers and links.


When private investigator Wade Griffin moved away from his hometown of Wellman, Georgia he didn't think he would be back. Too many memories and too many bridges burned. But when an old friend is found brutally murdered and mutilated, nothing can keep Griffin from going home.

Teamed with another childhood friend, Sheriff Carl Price, Griffin begins an investigation that will lead down darker paths than he could ever have imagined. Soon Griffin and Price find that there are secrets both dark and ancient lurking in the back woods of Crawford's Hollow.

As Halloween approaches, something evil is growing near the roots of the Georgia mountains, and the keys to the mystery seem to be a woman of almost indescribable beauty and a dead man who won't stay dead.

As the body count mounts and the horrors pile up, Griffin and Price come to realize that the menace they face extends far beyond the boundaries of Wellman and that their opponents seem to hold all the cards. But the two lawmen have a few secrets of their own, and one way or another there will be hell to pay.


Available in Trade Paperback and for the Kindle

CONGREGATIONS OF THE DEAD 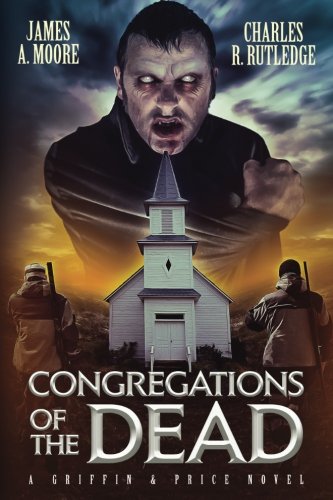 In the small town of Wellman, Georgia, Sheriff Carl Price wants nothing more than to ticket speedsters and stop drunks from killing each other in the local bars. Unfortunately, things aren’t working out for a simple life.

His best friend, private investigator Wade Griffin, has taken on a case he normally wouldn’t, to try and build his P.I. business and get out of the mercenary game, which leads to trouble with a major regional crime boss.

With a missing teenager and a child abduction to solve, and tension brewing from the other-worldly Blackbourne clan, Griffin and Price have their hands full. But something dark rears its head in the form of a new mountain church and its mysterious and charismatic leader, Reverend Lazarus Cotton.

Once more, Griffin and Price must use the deadly skills learnt in their past, and call upon even deadlier associates when the problems escalate out of their control.

Congregations of the Dead book is a redneck adventure-horror of the darkest kind. In the small town of Wellman, Georgia, it’s a damn hot summer.

Available in Trade Paperback and for the Kindle


Something dark is looming in Brennert County, Georgia. Sheriff Carl Price and ex-mercenary-turned P.I. Wade Griffin know well the other-worldly undercurrent that runs through the small town of Wellman, but with the Blackbournes trying to rebuild their strength, it seems they can breathe a little easier, Just a little.

Griffin starts working a case when he stumbles across a massacre at a drug lab, and when Price is called to the scene of a brutal triple homicide, it has all the markings of Blackbourne retribution.

Before the blood is dry, two more people are torn apart.

As the body count rises, Griffin and Price find themselves in the middle of a turn war where bullets and black magic are the weapons of choice. Caught between the worlds of monsters and men, Griffin and Price enlist the help of associate Carter Decamp to put an end to to the brewing battle.

But the gates of Hell have been opened and the beasts won't be denied their chance to feast.

Available in Trade Paperback and for the Kindle