Release Day: Exile of the Seas by @JeffeKennedy

Make room on your shelves (or eReaders) for the second book in Jeffe's Chronicles of Dasnaria High Fantasy trilogy! The saga of the erstwhile princess of Dasnaria continues in this thrilling adventure of self-discovery and self-worth! 🎉🍾🎉 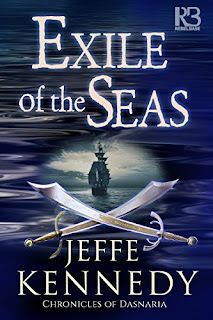 EXILE OF THE SEAS
Chronicles of Dasnaria, Book 2

Around the shifting borders of the Twelve Kingdoms, trade and conflict, danger and adventure put every traveler on guard . . . but some have everything to lose.

Once she was known as Jenna, Imperial Princess of Dasnaria, schooled in graceful dance and comely submission. Until the man her parents married her off to almost killed her with his brutality.

Now, all she knows is that the ship she’s boarded is bound away from her vicious homeland. The warrior woman aboard says Jenna’s skill in dancing might translate into a more lethal ability. Danu’s fighter priestesses will take her in, disguise her as one of their own—and allow her to keep her silence.

But it’s only a matter of time until Jenna’s monster of a husband hunts her down. Her best chance to stay hidden is to hire out as bodyguard to a caravan traveling to a far-off land, home to beasts and people so unfamiliar they seem like part of a fairy tale. But her supposed prowess in combat is a fraud. And sooner or later, Jenna’s flight will end in battle—or betrayal . . .

Email ThisBlogThis!Share to TwitterShare to FacebookShare to Pinterest
Labels: Chronicles of Dasnaria, Exile of the Seas, Jeffe Kennedy, Release Day